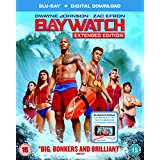 Water, Muscles and Lots of Fun.

Baywatch comes to the big screen and what a blast it is, under the direction of Seth Gordon (Horrible Bosses), he brings out the comedy element in our stars. This film puts the tongue firmly in the cheek of this very popular TV show from the late 1980’s. This version is the one they would show after the watershed due to the swearing.

Emerald Bay, Florida and the ever popular Mitch Buchannon (Dwayne Johnson, San Andreas 3D) jogs down the beach and surveys the sand. He and his team protect the users of the beach and surf the waters in the sunshine of Florida. 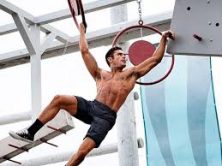 The beach is a very popular spot and everybody wants a piece of it or all of it. Patrolling the beach is officer Garner Ellerbee (Yahya Abdul-Mateen II, Sidney Hall) who always thinks Mitch does too much of his job and poking his nose into things he should be dealing with.  Mitch doesn’t worry about that, he is preparing for the annual competition for

the new recruits to the Baywatch team. Hopefuls are Summer Quinn (Alexandra Daddario, Percy Jackson: Sea of Monsters) and Ronnie Greenbaum (Jon Bass, All Nighter) and someone who thinks they belong on the team by way of being the winner of two Olympic gold medals, Matt Brody (Zac Efron, Dirty Grandpa).

The problem Ronnie has is the crush he has on  C, J Parker (Kelly Rohrbach, The PET Squad Files) which leads to some hilarious antics.

pushing the drugs he finds on his beach and when a local councillor dies on a boat just off the coast and the girls he was with have the same drug on them, the Baywatch team swing into action. When they are invited to the Huntley, Mitch and his second in command Stephanie Holden (Ilfenesh Hadera, Old Boy) go and investigate while Brody is on the lookout, as you can expect nothing goes as planned. Brody has to make amends but will Mitch and the team let him back in?

Plenty of action and plenty of laughs, ace fun. 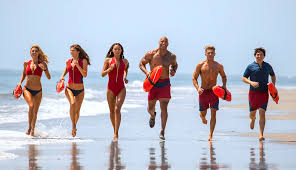 Baywatch is available on Blu-ray now