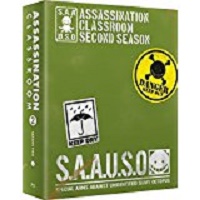 The Start of the End.

Director Seiji Kishi (Humanity Has Declined) brings us season 2 of his super-charged save the planet anime. With the continuing antics of Class E-3 as they try to assassinate their teacher Koro-Sensei before someone else claims the bounty before the deadline. 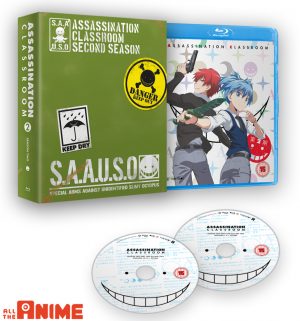 separated from the main body of the campus, seated high on a mountain side. Perfect for what they train for, these students must become the best assassins on the planet to kill their Mach twenty moving teacher, who threatens to destroy the planet in March, just five months away.

It’s the nearing the end of the summer vacation for E-3 and as usual Koro-Sensei has a scheme and that is to put his students through a test of courage. Dare they walk through a haunted cave, (ulterior motive get the students into some romance) he pairs the students up (boy and girl) and they delve into the murky depths of the tunnel,

with Koro-Sensei jumping out at them, but some of the students are far more scary than the teacher. His plan to use his student romances to write a novel fall flat, but what they do find out is that Professor ‘Bitch’ has romantic feelings for Mr K. The class approve and try to set them up and get them together.

Meanwhile elsewhere Lovro is attacked by a mysterious assassin who disappears  into to the fog.

It’s back to school and the plans start coming in and Kaede is up first, taking advantage of over production of eggs she is going to make a giant pudding with an anti Koro-Sensei bomb at the bottom. But the super fast and pudding loving teacher is not so easily caught out and so the teaching continues. Today it is going to be parkour in the mountain

forest and they have to avoid being captured by Karasuma, these are all skills they will need to take their teacher down, it can also get them in trouble where they will learn vital life lessons.

Their daily lives are also a struggle as they have their mid-term exams coming up and the rivalry between them, the main campus and the A-Class elites as well as the school principle who will do anything to prove that his teaching methods are the best and put an end to the up and coming E-Class and Koro-Sensei.

The end must come soon. Will it be E-Class or maybe the mysterious Reaper that will get the job done? The best fun that death can bring.

Assassination Classroom is available on DVD and Blu-ray.