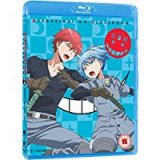 Life, Deaths and Floods of Tears.

It’s finale time and what a finale it is. Class E-3 have a job to do and do it before anyone else. All The Anime release is on Blu-ray and DVD and it is a fantastic ending to the series. We all knew that E-3 had one year to kill their teacher Koro-sensei, now that time is almost up. Death or obliteration.

The final instalment of Assassination Classroom reveals many secrets and

answers the question we are all asking, where did Koro-sensei come from?

This is all answered.

Kaede attacks Koro-sensei with her own tentacles because she blames him for the death of her sister, the former teacher of class E-3, this is where we get

Koro-sensei’s origin story and I’m not going to spoil that for you.

We also find out what actually happened to the moon and the implications on what will happen to planet Earth if Koro-sensei isn’t dispatched before the end of the school year.

It’s all about the heartbeats.

Or could Nagisa come up with a plan to save their teacher from his predicament?

Lots of questions and so little time for answers.

It is just an ace finale.

Assassination Classroom is definitely one to own and cherish in your anime collection, just have the tissue box ready. 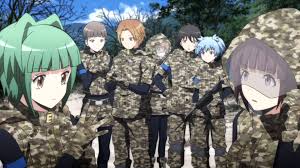 Assassination Classroom is available on Blu-ray and DVD