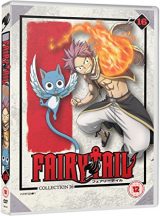 The Flip-side of the Great Magic Games.

A-1 Pictures bring us season seven of the ongoing story of the Fairy Tail magic guild, as they continue their battle against Fiore’s top magic guilds. We are in the thick of it now as plans are afoot to rid the world of Zeref and the dragon Acnologia.

tale to tell the others. He takes them back to where he ended up after Natsu had pushed him in a mine cart. What greets them is astonishing, a massive collection of giant bones, dragon bones. The bones have been there some time, but Wendy realises she has been doing a spell wrong. She thought that it was a weapon, but now she realises that it is for talking to spirits, so she casts milkyway and waits to see what is out there. After a short while she declares ‘I’ve found one’. A ghost of a

dragon appears, Zirconis ‘The jade dragon’ tells them of far off times when the dragons fought each other and one of them gave humans the power of dragons and one of them was so vicious that he actually turned into the dragon Achnologia.

Meanwhile in the Saber Tooth guild, Jiemma is laying down the law again, against the dragon slayers Rogue and Sting because they were defeated by

Natsu in the last round of the Grand Magic Games. Jiemma has no place in Saber Tooth for losers and when the Exceed Lector stands up for the pair Jiemma fires on him. When he sees the Saber Tooth emblem on him he disappears, which sends Sting over the edge and he retaliates by blasting him in the chest, mortally wounding him. Now there is a power play within Saber Tooth.

The wizards are then approached by Arcadios and Yukino, who profess their

plan to kill Zeref and Acnologia. They are going to use the Eclipse Project to achieve this and they need the help of the Celestial wizards Lucy Heartfilia and Yukino to use their keys to open the gate. They have a bold plan to use Celestial time, which flows differently to that in Fiore. They will use this and travel back in time some 400 years and kill Zeref before he becomes immortal. But not everybody is happy

Last day of the G.M.G.’s and it is an all out battle to become the number one guild in all the land. Season seven is going to be a doozy. Enjoy the wizardry antics of Natsu and Fairy Tail. 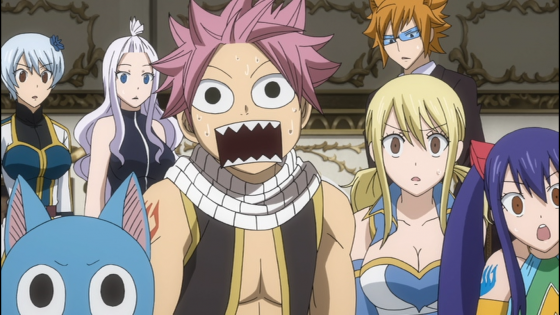