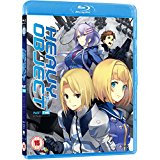 This is the conclusion of Takashi Watanabe‘s (The Slayers) Heavy Object where 200,ooo ton war machines battle, instead of conventional warfare with ground troops and aerial battles. These machines can withstand a direct nuclear blast. So the pilots have to be very skilful to defeat another Heavy Object. 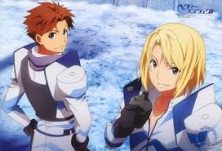 Qwenthur and Havia have survived all the battles and Qwenthur is hailed as a hero for being the first person to bring down a heavy object without another heavy object.

abandoned city, the Legitimate Kingdom give chase. But the Baby Magnum to heavy damage in the last battle so while undergoing repairs by Ayami Cherryblossom, our hapless duo are sent in to reconnoitre the city. When they get there major Frolaytia Capistrano tells them that the MDF’s leader is there and he is seeking asylum with the

Intelligence Union. This situation is dangerous for all as it could start a 4-way battle, so Qwenthur and Havia are given the task of killing Sladder Honeysuckle.

Frolaytia still hasn’t forgiven Qwenthur for saving her from marriage to Halreed, (well not in the method he used) and she treats

our pair of have a go heroes like a severe mistress and raids their rooms in search of smutty magazines and deals out her punishment on our perverted duo. Qwenthur realises that the MDF are not running but are holed up and are settling in, is this the unknown factor, do they have another heavy object.

When Baby Magnum turns up the princess falls into a MDF trap leaving her vulnerable to attack when another heavy object shows up in the city. 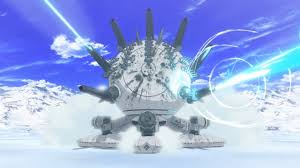 explosive charges and manages to capture Sladder with a timely intervention by Havia. The capture of Sladder means the others attacking is pointless, so everybody goes their separate ways and our duo are sent on their next mission. This sees them back in Alaska and sent to destroy the technology from the wrecked ‘Water Strider’.

With battles with old enemies and a with people trying to do away with the Heavy Objects and get back to mass destruction and conventional war, the Legitimate Kingdom have their work cut out for themselves.

With slick animation and great CGI, this is one to add to the collection.

Heavy Object is available on Blu-ray.