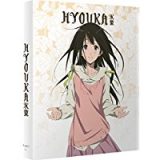 Hyouka Part 2 is based on the mystery novels written by Honobu Yonezawa and is also known as the Classic Literature Club series. It is produced by Kyoto Animation (K-On!!, Love, Chunibyo & Other Delusions) and directed by Yasuhiro Takemoto (Full Metal Panic? Fumoffu). This release includes episodes 12-22 and concludes the story. 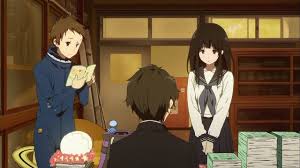 Hyouka tells us the story of Houtarou Oreki (Adam Gibbs – Penguindrum), a high school first year whose main aim in life is the conservation of energy.  At the request of his sister Tomoe (Caitlin Glass – Fullmetal Alchemist, Guilty Crown) who is travelling overseas, he agrees to join the Classical Literature Club in order to secure its survival. 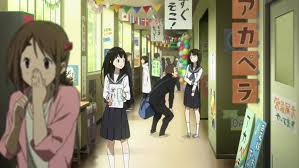 With the Drama club’s film finished, the time for the Kan’Ya Cultural Festival has finally arrived, an important time for the Classic Literature Club. Unfortunately, a club tradition is that they always encounter some sort of trouble during the festival and this time is no exception. 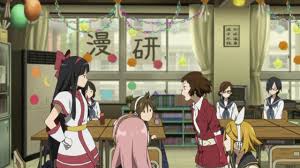 Somehow, 200 copies of the club anthology “Hyouka” have been printed instead of just 30 and they must find a way to sell them all. On top of that, there is a new mystery to be solved, as a phantom thief calling themself Jumanji is stealing small items from each of the clubs. Can our amateur detectives turn this to their advantage? 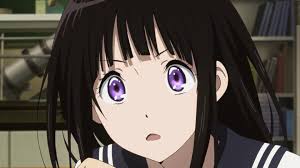 Hyouka Part 2 follows on brilliantly from the first part and sees a continuation in the character development. This time we see more of their individuality as they each split up and work towards selling their anthology.

The animation is lovely, especially the colourful festival scenes, but manages to be brooding when necessary and the story is good to the end, even the final five one shot stories to finish off.

Very uplifting and a must own for fans of Part 1.

“All manga is basically the same? I can’t let that statement stand. I’ll prove her wrong…” 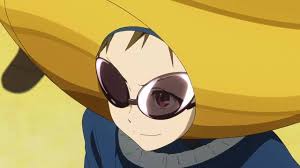 Hyouka Part 2 is available to buy now on Collector’s Blu-ray and Standard DVD.