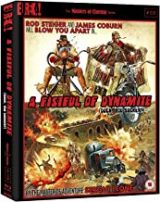 A Mexican, an Irishman and a Explosive Situation.

Writer/director Sergio Leone (A Fistful of Dollars, For a Few Dollars More, The Good, the Bad and the Ugly, Once Upon a Time in the West, Once Upon a Time in America) brings us the second film of his Once Upon a Time Trilogy with this dynamite western. Spaghetti westerns are Leone’s genre and this Masters of Cinema limited edition release shows off Leone’s cinematic flare for the dramatic in this breakdown of the intricacy’s of a revolution.

Revolution-torn 1913 Mexico and a man stares out at the vast expanse of his country, he spies the dust cloud of a possible saviour. Barefoot and looking scruffy he heads for the road where a huge stagecoach carries a group of posh people who spend their time indulging in fine foods and wine while talking about the peasants of the country wanting to rule. (Very racist for nowadays).

The man manages to get a ride in the carriage and they put him at the back and use him as the prime example of why they should run the country and not hand it over to these lowly ignorant natives. But that all comes to a sudden halt as a group of peasants put rocks under the wheels as the coach struggles uphill.

It turns out that the barefoot man is Juan Miranda (Rod Steiger, On the Waterfront, Oklahoma!, Al Capone, The Pawnbroker) the head of a family of bandits and he is out to make as much money he can in these turbulent times. 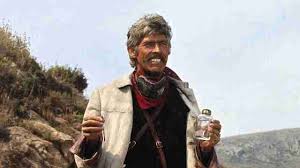 With his spoils the family confiscate the coach and head off until they get to a gorge where explosions are going off and out of this confusion and dust comes the sound of a motorcycle. As it appears out of the dust  a stunned Juan takes out his pistol and shoots the tyre of the motorcycle bringing it to a halt. The rider is John H. Mallory (James Coburn, The Magnificent Seven, The Great Escape, Our Man Flint, The Muppet Movie) an Irish explosives expert with a very murky past.

What Juan sees is something completely different, glory and money, the way into the bank of his dreams in Mesa Verde that he had seen when he was a boy travelling with his bank robbing father, but that one was beyond his fathers skill.

This is their story and how the best laid plans of men in a revolutionary country never run smoothly.

A Fistful of Dynamite is a must for any western/ spaghetti western fan as Leone’s direction is awesome as is the acting of Steiger and Coburn, throw them all together with the practical effects and you are in for one heck of a ride.

A Fistful Of Dynamite (AKA Duck, You Sucker!) (Masters of Cinema)
Limited Edition is available on Blu-ray