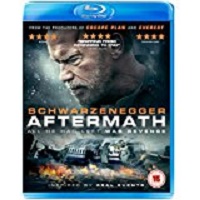 Based on real events in 2002 (names and location changed) that saw the tragedy of the loss of many lives. Director Elliott Lester (Blitz) gets the very best out of his cast, especially Arnold Schwarzenegger (Terminator, Predator, Total Recall) who shows his emotional side in this harrowing tale of mass loss.

Roman Melnyk (Schwarzenegger) is a highly respected top guy on a construction site. It’s almost Christmas and he is eagerly awaiting the return of his wife and pregnant daughter from over seas and his boss gives him time off to

prepare for their return. After sprucing himself up he heads for the airport, with flowers in hand, but when he gets to the arrivals board, flight AX-112 says see the desk. He goes to the desk and inquires about his wife’s flight. He is directed upstairs and requested to take a seat in a room. Whilst there he hears shouting and banging on the walls. Then a woman comes in and explains about flight AX-112 and flight DH 616 coming together and that no survivors are expected. Tragedy.

Earlier Jacob “Jake” Bonanos (Scoot McNairy, 12 Years a Slave, Argo) came on his night shift job as an air traffic controller. The night is quiet and his workmate goes to get a snack while Jake takes over both work stations. He has no trouble handling things until two maintenance guys start working on the phone lines as a call from a captain comes in wanting to be directed to Pittsburgh. Jake cannot get

Both men are distraught, but it is about how each one deals with this event.

Roman goes to the crash sight and manages to become a volunteer and collect wreckage. He does this due to his ulterior motive of finding his wife and daughter and while searching he finds his daughters necklace and nearby her body still sat in her chair hanging in a tree. Harrowing.

Jake on the other hand goes off the rails, much to the dismay of his wife

Christina (Maggie Grace, Taken) and his son Samuel (Judah Nelson, Anchorman 2: The Legend Continues). It becomes even worse when the neighbourhood blame him for the crash. Christina and Samuel move out when Jake gets too bad to live with. The inquiry does not find him solely to blame but the lawyers and the man in charge says it would be best if he changed his name and move away.

Roman believes that Jake is to blame and he wants to find him and look into his eyes and show him a photo of his family and get an apology which is lacking from the airline or their lawyers. He is contacted by journalist Tessa (Hannah Ware, Old Boy) who is doing a book on the crash. Roman turns in on himself and puts all his efforts into finding Jake.

This isn’t by any means a happy film, it is a film about how different people deal with grief and guilt and director Elliott Lester gets the best out of his cast especially Mr Schwarzenegger who shows more emotion in this film than the rest of his career. Ace.

Aftermath is Available to Buy Online.