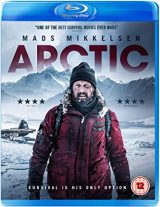 Arctic is an astonishing tour de force from Mads Mikkelsen. Written by Ryan Morrison (Stowaway) and Joe Penna (Turning Point, Beyond), who also directs, it is an international co-production between Iceland and the United States. It was shot in Iceland over the course of 19 days.

“They’re looking for you, don’t worry. They’ll be here tomorrow, or the day after tomorrow. Don’t worry.”

Arctic tells us the story of Overgård (Mikkelsen – The Necessary Death of Charlie Countryman, Hannibal), a pilot whose plane has crashed in the arctic. Despite the severity of his situation, he has kept himself alive through sheer ingenuity, rigging up makeshift ice fishing stations, trying to operate a distress beacon and carving a giant S.O.S. into the snow. It appears he has everything under control, however it is heavily implied that there is a polar bear in the area when his fish are stolen.

It seems his perseverance has paid off when a rescue helicopter appears on the horizon. However, there is a storm blowing and the helicopter crashes, killing the pilot (Tintrinai Thikhasuk) but leaving the passenger alive. The passenger is a young woman (Maria Thelma Smáradóttir – Fangar), badly injured but hanging in there.

Overgård patches her up as best he can, takes whatever he can from the stricken helicopter and takes her back to his plane where he can look after her and keep her safe.

As their situation worsens, he is forced to take the terrifying decision to leave the relative safety of the plane and try and reach help.

Arctic is an absolute masterclass in survival filmmaking. The tension building is extraordinary, subtle but so effective that I actually nearly fell off my chair twice. The pacing is perfect, it should feel slow but it doesn’t and the characters are relatable even though there is no backstory. 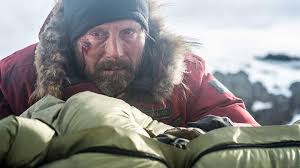 What really makes this film is the incredible performance from Mads Mikkelsen. It is an amazing portrayal of the resilience of the human spirit, a role that could easily have been overplayed and which very few actors could have pulled off. A brilliant film and well worth adding to your collection.

Arctic is available to buy now on DVD and Blu-ray.