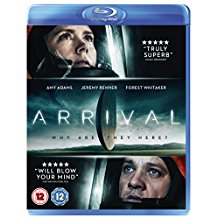 From director Denis Villeneuve (Sicario) comes a clever and intelligent alien encounter film, far removed from all the other Hollywood first contact films.

A woman who cares for her terminally ill daughter, Louise Banks (Amy Adams, Man of Steel, Batman v Superman: Dawn of Justice) is a lecturer at a university

and whilst she is teaching, twelve massive alien spacecraft enter the Earth’s atmosphere and descend to hover sixty feet above the planet’s surface.

They are are all over the planet, in cities, over seas and in the middle of Montana. Louise is asked by Army Colonel Weber (Forest Whitaker, Rogue One, Taken 3) for the use of her linguistic skills in helping them communicate with the aliens.

She is to pair up with physicist Ian Donnelly (Jeremy Renner, Captain America: Civil War, Mission: Impossible – Rogue Nation, Avengers: Age of Ultron) and work out a way to ask the aliens what they want. An army camp has been set up next to the alien craft suspended above the vast plains of Montana.

They are soon suited and booted and in a scissor lift and entering the craft through a hole in it’s base. It’s dark and totally devoid of anything apart from gravity defying rough hewn corridors. They head forward and come across a large room with the far end clouded in a thick mist. There is a barrier between them and the mist, at first there is nothing to see but slowly something appears and it isn’t humanoid. They see two large seven limbed beings dubbed as “heptapods”, but Ian prefers to call the two extraterrestrials ‘Abbott and Costello’.

Louise discovers they have a form of a written language, but it is nothing like

anything a human has ever written.

This isn’t a quick job and and it takes Louise time to learn how to make a vocabulary enough to communicate with Abbott and Costello. It is when they are communicating that they decipher the words for their question, ‘what do you want?’. The answer comes graphically back “offer weapon”.

The confusion starts as the military is in charge all over the world, a similar translation is deciphered at a different site also mentioning a weapon.

It is now a race between Louise and the army as she tries to convince them that their words have a different meaning.

This is a clever twist on the first contact alien films. 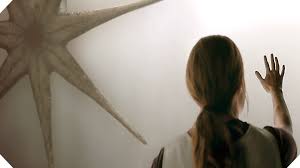