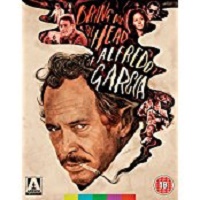 Peckinpah at his Rawest.

Arrow Video bring us the quintessential Sam Peckinpah (The Wild Bunch, Straw Dogs) package, he himself said that this film is the most of him in a film, as film executives always used to meddle with his work. Also this 4 star film becomes a 5 star Blu-ray package because of the special features and the bonus disk of the Man of Iron director’s cut documentary with over 10 Hours of previously unseen interviews. (See bottom of page)

The film starts at a tranquil lake with a young girl idly dipping her feet in the cool water as she rubs the growing bump in her midriff.

Her peaceful day is soon broken by a woman telling her that her father wants to see her. Theresa (Janine Maldonado, Political Asylum) doesn’t move until two of her fathers hired men turn up to escort her to their large house, where everyone is

gathered. She is presented before El Jefe (Emilio Fernández, The Pearl), he is furious that his little daughter is pregnant and wants to know who is the culprit for deflowering his daughter. She is defiant and refuses to tell the name of the man she loves, she wears the locket he gave her 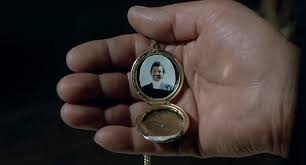 before leaving. Her wants that name and he has his men rip off her top bearing her pregnant state to all, still nothing even when they bend her arms behind her. El Jefe is determined and when her wrist snaps we get the name Alfredo Garcia!

“I will pay one million dollars. Bring me the head of Alfredo Garcia!”

With that decree the house empties as people go in search of a soon to be dead man. But a couple of months go by and there is no sign of the man. Mexico a small bar a couple of men in suits walk in, Sappensly (Robert Webber, 12 Angry Men, The Dirty Dozen) and Quill (Gig Young, That Touch of Mink) asking the customers and the staff 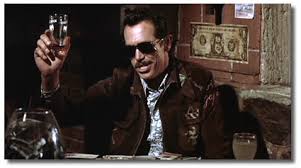 if they had seen the man in the photo. They spot a fellow American playing the piano and hope he is more likely to help them. There is money in it for bartender and piano player Bennie (Warren Oates, Badlands, Stripes). He knows of Alfredo Garcia or someone he knows knows of Alfredo. His partner Elita (Isela Vega, Saving Private Perez) has spent time with Alfredo much to the chagrin of

Bennie. Elita tells him that she had been with him but things are different now that he is dead. He died in a car crash after being in a drunken stupor.

Bennie comes up with a plan, a road trip to Alfredo’s last resting place and Elita knows where it is. How difficult can it be to collect one head from a dead person.

“Nobody loses all the time”.

With Peckinpah’s special brand of brutality, this is a bloodbath in the making and with all the extras this is a Blu-ray for your action collection.