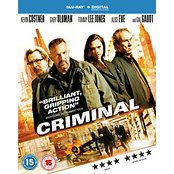 From the writers that brought us such films as the Rock and Double Jeopardy, Douglas Cook, David Weisberg and from relative newcomer director Ariel Vromen (The Iceman) comes a different take on the action film, which is pleasant and fresh. He has managed to bring these stars together and get the best out of them.

Bill Pope (Ryan Renolds, Deadpool, Green Lantern) (Uncredited in this film) is a CIA field operative with a big mission, bring in the ‘Dutchman’ (Michael Pitt, Funny Games) a hacker that has gained access to the US’s arsenal of Intercontinental Ballistic

Missiles by creating a ‘Wormhole code’.

He did this for industrialist-turned-anarchist Xavier Heimdahl (Jordi Mollà, Bad Boys II), but he got cold feet and made contact with Bill in London UK who manages to get him to a safe house before Heimdahl can get his hands on him.

Bill is being tailed by Heimdahl’s henchwoman Elsa Muellar (Antje Traue, Man of Steel) and in the pursuit Heimdahl works his magic on the computer and sends Bill’s getaway taxi to the wrong GPS address where Hiemdahl’s goons capture him. He is subsequently tortured but doesn’t reveal the Dutchman’s location.

When the CIA arrive Bill is dead, but Head of the CIA Quaker Wells (Gary Oldman, The Dark Night Rises) needs the information in that head, so he sets about retrieving it by contacting Dr. Franks (Tommy Lee Jones, No Country for Old Men, Men in Black), a man who is five years away from human trials but he has just 48 hours to bring Bill Pope’s mind back on line.

He chooses the recipient carefully, a 1 in 10 million subject Jericho Stewart (Kevin Costner, Dances With Wolves, The Untouchables) a man that dose not fit into society as his brain was damaged very early on his life, but he is their best hope of bringing back Bill Pope’s memories.

This is where the film takes off, we see whether or not the operation is a

complete success or if the psychotic thoughts of Jericho stay in place.

But the world is in danger so this has to work, but Jericho isn’t the most cooperative of people and when the CIA send him back to the States he has to take things into his own

hands and that means going back to Bills house where his wife (Gal Gadot, Fast and Furious, Batman VS Superman: Dawn of Justice) and daughter (Lara Decaro, The Infiltrator) are mourning her husband.

This is a really good film of its type and with this cast it should be, but ‘this is Costner back at his best!’.