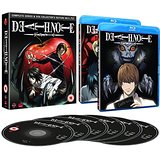 A Bored Human, A Bored Shinigami.

What could Possibly go Wrong.

Death Note first aired in Japan back in 2006 and now Manga UK bring us all 37 episodes and the OVA to make a glorious 6 Blu-ray package, that will have you glued to the screen. Based on the manga written by Tsugumi Ohba (Bakuman) and illustrated by Takeshi Obata (Blue Dragon Ral Grad) and shown in Weekly Shōnen Jump. These episodes are directed by Tetsurō Araki (Attack on Titan) and tell the tale of a young man with a great sence of justice, all he needs is the power to carry it out.

The Shinigami Realm and the Shinigami have little to do and Ryuk is the most bored and need some stimulus. Meanwhile on Earth number one student Light Yagami is also bored in his classroom, when out of the corner of his eye he spots something falling to the ground. 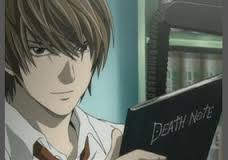 At recess he finds what it was, a book with Death Note written on it. Looking through it he notices writing inside stating that any human name written within its pages will die. Light thinks that it is a prank, puts it back on the ground and walks away.

Light is a strong believer in Justice, like his father Soichiro Yagami who is a top police officer. But his father has to follow the rules. With reports of murders and stabbings all over the media, Light is soon back at school and the Death Note is now in his possession. 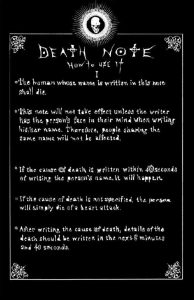 He carefully reads the instructions within the opening page of the notebook.

They are pretty specific but generally they are:

Over the next five days Light is a very busy young man with the scumbags of the country falling down dead of the aforementioned heart attacks. 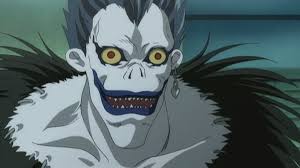 This is when Ryuk decides to reveal himself to Light. It comes as a shock to Light to say the least, but he sees the logic that a god of death would be the reason for the Death Note. Ryuk is very impressed with Light’s work load over the last few days.

Only the holder of the Death Note can see or hear the Shinigami, so light has a personal guide to the world of death. 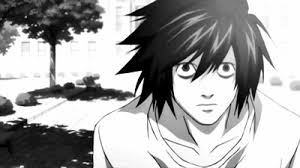 The event of all these deaths of violent and deadly people soon raises questions and the event/person is called Kira, which interpol is investigating. They decide to use the world’s top-ranked detective, L, whose true identity is a well-kept secret. He is highly intelligent and soon has a demographic for this mass-murderer.

It is now a cat and mouse case as L tries to find the killer of killers and will keep you on the edge of your seat as the story unfolds.

“This is top shelf stuff”

“Is there anyone out there, other than me, that is willing to eliminate the vermin  from the world? If I don’t do it, then who will? That’s just it, there is no one. But I can do it. In fact! I am the only one who can. I’ll do it using the Death Note. I’ll change the world!” 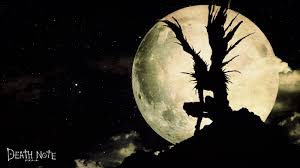