3 stars for this energetic and fun magical girl anime. 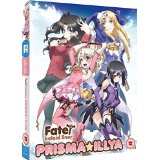 Fate/Kaleid Liner – Prisma Illya is brought to us by the Silver Link Studio and is a spin off from the popular visual novel Fate/Stay Night.

Set in an alternate universe to Fate/Stay Night and Fate/Zero, this is the story of Illyasviel Von Einzbern, a normal school girl, living in Fuyuki City. She lives with her brother Shirou under the care of Leysritt and Sella, who look out for the pair while their parents work abroad. 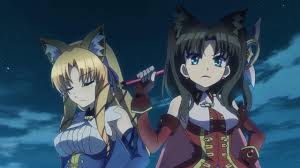 Her peaceful and carefree existence is about to change however, thanks to the arrival of two bickering magical girls, Rin and Luvia, who have both been lent Kaleidosticks to help them in their quest to recover the seven missing class cards which have found their way to Fuyuki City.

Their constant arguing and misuse of their powers finally leads the two Kaleidosticks, Ruby and Sapphire, to rebel and refuse to work for them any more. This leaves them with a dilemma though, they still need to recover the cards, so they go in search of a new magical girl each. 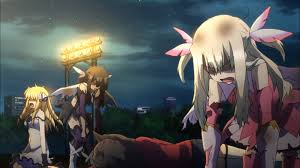 Eventually Ruby comes across Illya, tricking her into taking on the job of magical girl and finding the cards. Sapphire finds Miyu, a mysterious new transfer student in Illya’s class and somehow, with the reluctant assistance of Rin and Luvia, they must all work together to complete the task at hand. 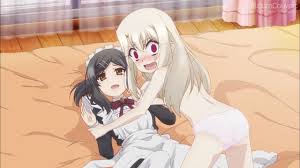 That is it basically in a nutshell. There are plenty of excellent battle scenes as the girls attempt to defeat the various cards. It seems to be more about the characters than anything really though. Fate/ Kaleid Liner – Prisma Illya is very definitely aimed at the female audience.

There are only two male characters, one is an idiot, the other a creep, other than them it is all giggling, pink frilly knickers, naked butt cheeks and glitter, pretty much evrything is pink and frilly in fact. 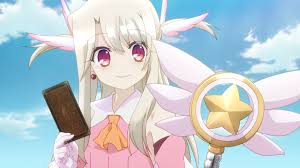 Most blokes would probably be horrified.

It is all very entertaining, with plenty of humour, again very female oriented but with a really good storyline. Perhaps not as strong as the stories which spawned it, but fun nevertheless.

“Miyu. Your thoughtfulness is stopping you from being a proper magical girl. Take a look at Illya, she completely lacks common sense but gets results. That kind of air-headed nature is what truly makes a magical girl.” 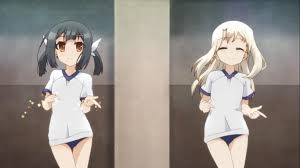