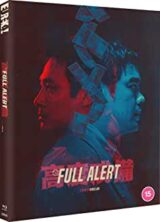 Some Victories Come at a Higher Cost.

Respected writer, director Ringo Lam (Wild Search, City on Fire, Wild City) brings us his handing over to China of Hong Kong film. A dark tale about two men, one on the wrong side of the law, and both hate to lose. Who will come out a winner?

Hong Kong 1997 the police have been called to an apartment building after reports of people being ill after drinking the water supply. The reason for the contamination is the dead body in the cistern, feeding the building.

Across town, Mak Kwan (Francis Ng, Infernal Affairs II, 2000 AD, Bullets Over Summer) makes a desperate phone call to find out if the architect was dead or not.

He is, and Inspector Pao (Ching Wan Lau, Life Without Principle, Good Times, Bed Times, Big Bullet) know’s Kwan did it, as he left lots of prints at the scene. Kwan and his girlfriend Chung Lai-Hung (Amanda Lee, Shanghai Grand, 9413) are soon in police custody, where Kwan claims it was in self defence.

There is no escape from murder.

Pao questions Kwan about the blueprints and explosive paraphernalia found in his apartment, Kwan keeps quiet about those, but Pao knows he’s planning something big. But what, where and more importantly when?

Kwan is whisked off to prison, But Pao knows that whoever Kwan is working with will try to break him free when they transfer him to the court. Sure enough  we get a great car chase through the busy streets of Hong Kong and a liberal spraying of bullets.

When you are about  to shoot…

The gang get away, and Kwan is still in custody. He will have to find his own way out, to do the thing he needs to do, to get payback.

Full Alert is a tense and dark fight between two men that hate to lose. Gripping stuff. 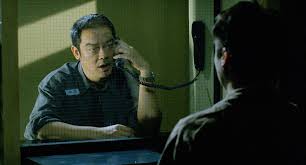 Full Alert is available on Blu-ray