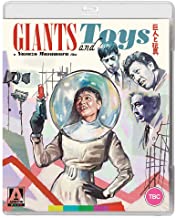 Giants and Toys is a Japanese film, originally released in 1958. It makes it’s worldwide Blu-ray debut in 1080p courtesy of Arrow Video. Based on the short story by Takeshi Kaikō, it has a  screenplay by Yoshio Shirasaka and directed by Yasuzô Masumura (Lullaby of the Earth).

The film is presented with it’s original Japanese mono audio and English subtitles.

“You need to be working in your sleep to put food on the table in Japan. You get used to it. You’re too soft.”

Nishi (Hiroshi Kawaguchi  – Venus Wars, Punishment Room) is a young enthusiastic and impressionable marketing assistant for confectionery company World. They are currently embroiled in an escalating advertising war with rival companies Apollo and Giant vying for shares of the caramel market. He finds himself pitted against his good friend Yokoyama (Kôichi Fujiyama – Three Bosses), head of publicity at Giant and Mosami (Michiko Ono – Afraid to Die) from Apollo, in whom his interest is not strictly professional.

His boss Goda (Hideo Takamatsu – Shogun, The Last Emperor) has a plan to take World to the top. He wants to run a campaign based on outer space, with space suits and ray-guns, commonplace to American children but new and exciting in Japan. He needs a face to sell all this and by chance one day he spots Kyoko (Hitomi Nozoe – The Lowest Man), a young girl from the slums with bad teeth whose bubbly personality and childish attitude makes her perfect for the role.

He immediately arranges photo shoots and her popularity skyrockets, everyone finds her easy to identify with. But as the campaigns gather momentum she begins to understand her rights, and becomes less open to exploitation by big business. Nishi’s attempts at industrial espionage are less than successful, Goda is under pressure and no-one knows who will survive this dog-eat-dog conflict. 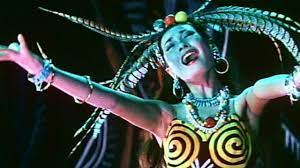 Giants and Toys is a brilliant film. It takes a cynical and insightful look at the rise of capitalism in Japan following the war and the subsequent change in attitude of both the business world and the general public. Despite this, it manages not to take itself too seriously, although dark it is still genuinely funny.

There is some lovely use of imagery, most notably Goda’s lighter, which takes several attempts to light and is superimposed over various montages to great effect. They also manage to get in the obligatory song and dance number.

A great watch and a very interesting cultural statement, this one is well worth adding to your collection.

“Back to business. These are Kyoko’s pictures. She looks good through a viewfinder. Plus, she can lick her nose.”