Hounds of Love is written and directed by Ben Young and is his very impressive debut full length feature film. Beautifully directed, this is a real treat for fans of the serial killer genre. It is loosely based on real events, which makes it all the more frightening.

“Say that you love her. Say that you understand why she left and that you’re happy she’s making a life for herself.”

Vicki Maloney (Ashleigh Cummings – Puberty Blues, Tomorrow When the War Began) is a young girl living in Perth, Western Australia in the late eighties. She is angry at the world, still trying to come to terms with her parent’s separation.  She seeks solace in the company of her boyfriend, Jason (Harrison Gilbertson – Need For Speed, Haunt). 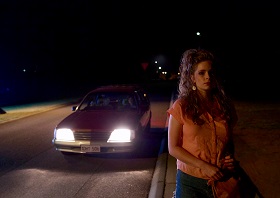 She lives with her father Trevor (Damian de Montemas – The Secret Life of Us) and reluctantly spends time staying with her mother Maggie (Susie Porter – Cargo, The Monkey’s Mask). Her life is turned upside down one night when she takes rebellion too far and sneaks out to go to a party against her mother’s wishes.

Too young and naive to know any better, she is tempted into a passing vehicle with the offer of weed to take to the party. Unfortunately for her, the car belongs to Evelyn (Emma Booth – Glitch, Gods of Egypt) and John White (Stephen Curry – Rogue, The Castle), a deranged couple who gets their kicks kidnapping and murdering teenage girls.

She is thrust into a world of terror and pain, where she must use every ounce of her intelligence in order to survive.

Hounds of Love is a really well written and well directed film, with some stunning acting performances. The tension is beautifully built as the story goes on and it’s a great idea for a serial killer film. By the end you’re on the edge of your seat and holding your breath.

Well worth adding to your collection and let’s hope to see more from Ben Young in the future.

“How would you feel if you never saw me again? That’s exactly what would have happened if she’d got out of that window.”