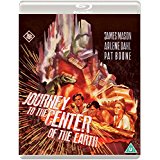 Eureka brings us one of the most influential adventure films of all time, based on the story by Jules Verne (20.000 Leagues Under the Sea, ‘Round the World in 80 Days, Mysterious Island). So influential that I did a Geology Honours Degree because of this magnificent film. Directed by Henry Levin (The Wonders of Aladdin, The Wonderful World of the Brothers Grimm, Come Fly with Me, The Desperados) who shows us the wonders deep below the surface. 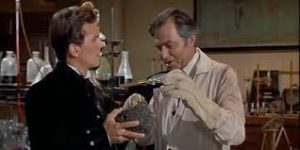 Fox, 20,000 Leagues Under the Sea, North by Northwest) Geology class at Edinburgh University and they are celebrating his newly appointed knighthood. His class have been given a day off for his Knighthood and they present him with a present of a inkwell. Alec gives Lindenbrook a present of a geological paperweight that he bought using the change. The Professor notices that the lava is far denser than it should be and he invites Alec to dinner at eight as he is entertaining some of the faculty, however Alec is reticent due to his scruffy attire. Intrigued Sir Oliver decides to investigate to lava more closely.

“We’re scientists, aren’t we? That’s one society where frayed cuffs don’t matter. We’ve ALL had ’em.”

Alec arrives at Sir Oliver’s promptly at eight and is greeted by Jenny (Diane Baker, Silence of the Lambs, The Cable Guy), Sir Oliver’s niece, a girl Alec is sweet on. But Sir Oliver is absent and hasn’t been seen since the morning. Alec and Jenny steal some time together alone (this where we here Pat Boone’s beautiful voice, singing Robert Burns). When the other guests arrive they are curious to why Sir Oliver is not there to greet them so Alec and Jenny head to the University, where they find him and his assistant Mr. Paisley (Ben Wright, Terror in the Wax Museum) working on the rock. 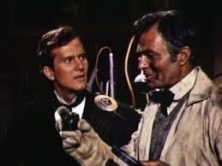 should be light and after chipping away at it the rock reveals something inside, Icelandic peridotite the heaviest known lava. How did the peridotite get inside a lava from the Mediterranean? Three notches can be seen on the harder rock and they need to melt off the lava to reveal what is inside but it may take two or maybe four hours much to the dismay of Jenny. But Paisley isn’t paying attention and causes an explosion in the furnace, revealing a plumb bob. This used to belong to the long lost explorer Arne Saknussemm some 300 years ago, he claimed that he descended to the center of the Earth.

“Mr Paisley, by your slip you have rendered an inestimable service to science!”

This sets off an adventure to Iceland once the writing on the plumb bob has been deciphered and he corresponds with the eminent Professor Göteborg of Stockholm (Ivan Triesault, The 300 Spartans) but hears nothing in return, so

off they set into the unknown. In Iceland they find that Professor Göteborg has been surveying on the mountain and on their way back they are both kidnapped and thrown into an Eider loft where they are rescued by Hans Belker (Peter Ronson) and his duck Gertrude. They return to Reykjavik to their rooms and the same hotel at which the Professor is staying.

They meet Carla Göteborg, the Professor’s wife Carla (Arlene Dahl, Land Raiders) her rooms are full of climbing equipment and paraphernalia for going down into the depths of the Earth. Alec makes a grim discovery in another room, the body of Professor Göteborg. It turns out that he was poisoned and

won’t be needing the equipment any more, but Carla believes that her husband was the discoverer of Arne Saknussemm and refuses to hand over the equipment. But Oliver proves that he is the discoverer and she hands over the equipment with the condition that she and Hans go along. It turns out that there is another Saknussemm (Thayer David, The Eiger Sanction) who has been working with the now deceased Professor Göteborg and he is looking to descend into the depths of the Earth when the way is shown on the last day of May.

Time to descend into the Earth and see what adventures lie below.

Fun for all the family, a classic and now amazingly restored to 1080p and with all these special features a must for your classic collection.

“Poor Sir Oliver, stuck with a woman. If only you could see your face.”

“That’s my consolation, madam, I don’t have to look at it. You do.”