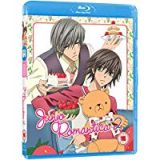 Junjo Romantica is based on the ongoing yaoi manga series of the same name by Shungiku Nakamura (Mangetsu Monogatari) and adapted to anime by studio Deen (Bakumatsu, First Love Monster). It was originally released in 2011 and is directed by Chiaki Kon (Golden Time, Back Street Girls). This release is the complete second season and features episodes 12-24. It is presented in Japanese with English subtitles.

This season takes place not long after the end of the first season. Once again we follow three separate but slightly interlinked yaoi relationships, this time seeing a little more about how they progress.

“We’re both Japanese here, so let’s be non-committal.” 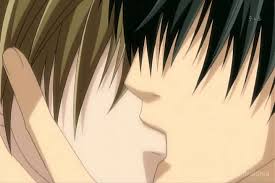 Romantica: College student Misaki and his unlikely lover, the eccentric novelist Usami, are slowly growing closer. But their relationship could be in trouble when Usami’s older brother appears and the two begin to vie for Misaki’s attention!

Egoist: Nowaki loves Hiroki with all his heart, but sometimes, he’s afraid Hiroki doesn’t feel the same way. When Nowaki asks Hiroki for permission to address him by his real name, as others do, Hiroki flatly refuses. 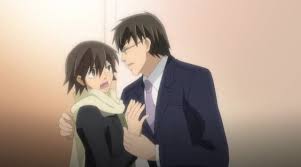 To Nowaki, this is just another reminder of the invisible gap that separates them… a gap that he must close, if they’re ever going to truly be a couple.

Terrorist: Miyagi is growing anxious. Shinobu used to be relentless in his devotion, but recently, the relationship has gone quiet. As a 35-year-old university professor, is Miyagi really content with living at the mercy of a younger man whose actions are still such a mystery?” 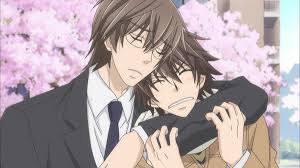 As with season 1, I found this series extremely difficult to watch, at best uncomfortable, at worst downright offensive. The animation looks incredibly dated and the story writing is very stilted, although that may be due to the subject matter. I’m sure that fans of the yaoi genre will love this series and they are of course who this is aimed at. Worth adding to your collection if this is your cup of tea.

“Brother, I never thought the day would come when I would suffer at the hands of strawberries.”