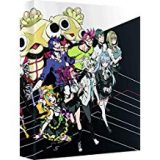 This is director Hiroshi Kobayashi‘s first full length anime series and it hasn’t been adapted from a manga, but there is now a manga spin-off of this quirky tale of the goings on in a specially built city for the advance of World peace.

A young boy runs through corridors as a young girl stands upon a high see-saw, he rushes towards her but she is too high before she leaps from her precarious vantage point. The boy screams and his hair instantly turns white as he feels the physical pain of the Kiznaiver girl. 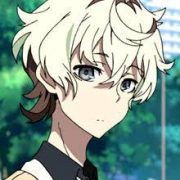 12 years later class 2A of the Sugomori Municipal School has just started their year.

Katsuhira Agata is an emotionally unattached young man who is always being bullied and beaten up for his allowance money and he says that he doesn’t feel the pain at all. His childhood friend Chidori Takashiro used to have feelings for him but 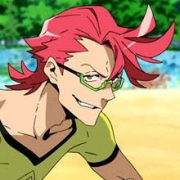 these days she knows that he wont show any back and so has given up on any romance. While being beaten up by his regular bullies, Hajime Tenga jumps in and saves Katsuhira and demands that the bullies give him back all the money they have extorted from Katsuhira and that he will take 20% of the money as a recovery fee and he will become his bodyguard.

Noriko confronts Katsuhira about his demeanour and his lacklustre efforts to stop the bullying.

“There are limits to all things you know. However if you don’t go beyond the limits, you’ll never get there.”

Then she pushes him down the flight of stairs behind him, when wakes he is in an underground hospital within the city and Noriko says that he and others from his class have had an operation to link them all, so that they all feel each others pain and this experiment is to advance the idea that if you can feel someone else’s pain you are less likely to hurt someone.

Now class 2A must learn about each others pain and the secrets that they have never told anyone else and see if they bond all closely observed by Noriko that keeps giving them dangerous tasks now that they are Kiznaiver’s and the epitome of her new classifications for the seven deadly sins.

A bold experiment for World peace and can Class 2A survive the summer, especially when you throw a masochist into the mix.

Kiznaiver is available on Blu-ray.