Masaki Kobayashi (The Human Condition trilogy,  Samurai Rebellion) bases this quadrilogy on stories from Lafcadio Hearn‘s (Studies of Strange Things) collections of Japanese folk tales from the early 1900’s. Kwaidan is four separate stories that will put a shiver down your spine, as you see the Japanese take on ghost stories in their own inimitable style.

The creepiness starts with a tale The Black Hair a tale of a man (Rentarô Mikuni, Free and Easy) who thinks his life is worth more than his life with wife number one (Michiyo

Aratama, Five Gents Trick Book) so he leaves Kyoto to find a higher position in life with a cold-hearted woman, wife number two (Misako Watanabe, Summer of the Moonlight Sonata), with everything he wanted the man is still not content. This is his story.

The Woman of the Snow is a tale of the price of your bond. A wood cutter and his apprentice (Tatsuya Nakadai, Listen to My Heart, Wicked City) are caught in a snow blizzard and seek refuge in a boatman’s shelter to wait out the storm and get home,

but during the night they are visited by a female spirit (Japanese vampire) (Keiko Kishi, The Twilight Samurai) who drains the life force from the old man. The young man witnesses the act, but the spirit is loathed to kill the good-looking young man, and she makes him swear that he must not mention this night to anyone ever, oops.

The third and collection defining film is Hoichi the Earless, the tail of a young gifted biwa player (Katsuo Nakamura, Shinsengumi: Assassins of Honor, Shinran: Path to Purity) who is blind. He is taken in by priests who feed and water him.

Hoichi’s specialality is recanting the tale of an epic sea battle between two clans, (The Tale of the Heike about the Battle of Dan-no-ura fought between the Taira and Minamoto clans during the last phase of the Genpei War) and this is what the spirits of that fateful day wish to hear and the warrior (Tetsurō Tamba, Three Outlaw Samurai, You Only Live Twice) will do his emperors bidding at all costs.

The final film In a Cup of Tea is just as it says, as the narrator (Osamu Takizawa, The Loyal 47 Ronin) tells us that not all good stories are ever finished, this tale is of an attendant of Lord Nakagawa Sadono named Sekinai. The Lord stops his retinue at a tea house, where Sekinai goes to take a drink but what he sees defies logic as he spies the visage of a young man in the drink, but there is no one else around. Disturbed he throws the cup down smashing it. This single act leads to supernatural spirits to be released.

Kwaidan is a brilliant collection of eerie tales, that will keep your cushion firmly gripped, as you delve into the supernatural world of the Japanese ghost stories. 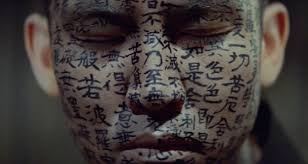