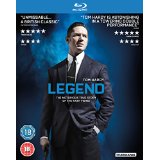 Writer/director Brian Helgeland (Writer, L.A. Confidential, Mystic River, The Sin Eater) (Directing, The Sin Eater, Payback, A Nights Tale) knows how to tell a great tale and he has kept up the good work with Legend. 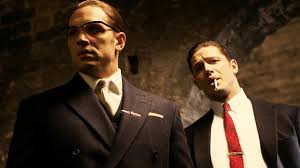 East End, London, 1960’s The Kray twins (Tom Hardy, Inception, Mad Max: Fury Road) have already made a name for themselves and they have a permanent tail on them in the form of Nipper Read (Christopher Eccleston, eXistenZ, Dr Who). Reggie knows this and with supreme confidence takes the waiting coppers a nice cup of tea, but po-faced Nipper refuses as does his

driver (Joshua Hill, Pride). Reggie’s normal driver hasn’t turned up so he decides to walk round and get him up, so his mate Albi (Paul Anderson, Sherlock Holmes: A Game of Shadows) follows him up in Reggie’s big American car, with Nipper tailing them.

At Franks (Colin Morgan, Testament of Youth) he is greeted by Francis (Emily Browning, Sucker Punch) and Reggie is immediately smitten by her beauty and invites her out on a date next Saturday night.

After their introduction Reggie heads off in the car with Frank at the wheel where they pull up for five minutes, well 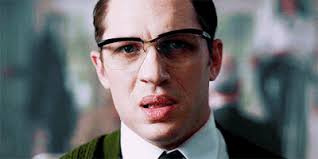 They have really gone to see his twin Ronnie who has just finished a three year stretch and has now been institutionalised with Paranoid Schizophrenia.

Reggie Uses his considerable influence to persuade Dr Humphries (Nicholas Farrell, Bloody Sunday) to give the board of officials a favourable report on Ronnie, in order to get him released. Now the twins are together and as they say the rest is history. 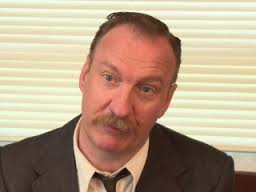 That’s all I am going to say apart from Tom Hardy is excellent as both Reggie and the disturbed Ronnie. See how they carve up the East End of London and move into the West End as they take on rival gangs and get in with the American Mafia. Great supporting roles from the likes of Christopher Eccleston,  Emily Browning and David Thewlis (Harry Potter and the Prisoner of Azkaban) who plays bookkeeper Leslie Payne.