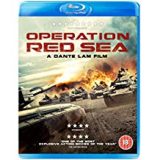 Bullets, Bombs, Tanks and Much Much More.

This is the must see conflict film of the year!

Propaganda film or not, Operation Red Sea is beyond anything you will see in a very long time. Dante Lam (as Lin Chaoxian)(Operation Mekong, The Stool Pigeon) brings us a story based on real events and this story is one of arduous exploits, that take us across vast areas with every type of modern military equipment. With spectacular visual effects and explosions that must have been felt a hundred miles away, you are in for a visceral experience that will shock and enthral you. A must own.

A film truly deserving of all the accolades, trophies and plaudits that it is receiving.

(Hanyu Zhang, Assembly, The Taking of Tiger Mountain) of the Linyi, a member of the 19th Escort task group of the Chinese Navy, gets a mayday call from a container ship that is being boarded by Pirates demanding ransoms. 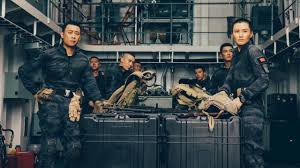 It is down to the People’s Liberation Army (PLA) Navy Marines to put a stop to them, led by Yang Rui (Yi Zhang, Blood of Youth) Marine Corps, Captain Jiaolong Unit 1 and Demolitions expert. 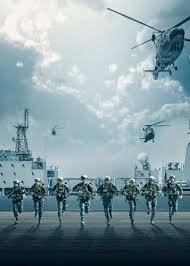 With sniper and spotter giving chase in the helicopter Seabird One, the others give chase in ribbed boats. As the pirates open up the hijacked ship up to 35 knots, the Navy are running out of time before the pirates reach territorial waters.

Xing and Dong do the long shots and save the hostages kept on the bridge and this is the first time you see the amazing super-slow motion of a sniper’s bullet travelling from muzzle to the back of a pirates head. But in the ensuing chase of

the top pirate, Xing is shot and is medically discharged and replaced by Gu Shun (Johnny Huang, Guns and Kidneys).

” The Soldiers Poem, A Soldier knows but Sacrifice and that he may not return”.

It is not long before the squad are needed elsewhere as General (Madman) Sharaf fights the extremist group Zaka lead by Sayyid (Hassane Guannouni) and all hell breaks loose as Chinese nationals need to be rescued by Unit 1. French-Chinese journalist Xia Nan (Hai-Qing, Finding Mr. Right) is after the head of Greenville Energy, William Parsons (Khalid Benchagra), who she believes has stockpiled unrefined Uranium in the form of Yellowcake, ready to make a Dirty-bomb.

Let the death and mayhem commence and with every conceivable modern technology available to Unit One and their enemies this is one heck of a battle royal.

Operation Red Sea is available on DVD and Blu-ray.