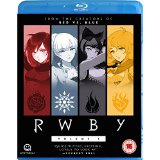 RWBY is brought to us by Rooster Teeth, the production team behind the internet sensation Red vs. Blue. It was created by Monty Oum (Red vs. Blue, Afro Samurai), and originally released as a Youtube series of 10 episodes.

With this release, you can watch either in the form of five separate episodes, or as I did, as a film. It works well either way. It doesn’t take long to see why this has become such a massive hit, the eye catching designs and clever animations and use of colour make it easy to follow and compelling viewing. 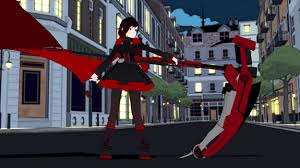 RWBY is set on Remnant, a world where humans are in an ongoing battle with the Creatures of Grimm, the other inhabitants of their planet. In order to combat them, a select few train to become hunters and huntresses, who go out into the world to do battle on behalf of the rest of humanity.

In order to train, recruits attend a college known as the Beacon Academy, run by the enigmatic Professor Ozpin (Shannon McCormick – Act of War), where they are subjected to grueling tests in order to separate them into teams. This series follows the creation and progress of two of those teams, team RWBY (Ruby) and team JNPR (Juniper). 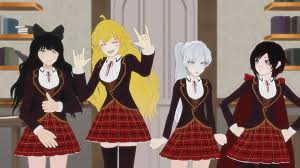 They are certainly an interesting bunch. Ruby (Lindsay Jones – X-ray and Vav) is two years younger than the others and makes a mixed impression at first, but soon manages to prove herself. Her sister Yang (Barbara Dunkelman – Ten Little Roosters) is already established at Beacon and the girls are delighted to find themselves on the same team. The mysterious Blake (Arryn Zech – iBlade) and the frosty and aloof Weiss (Kara Eberle) make up the rest of the team. 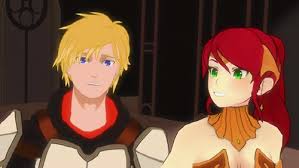 RWBY is packed with entertaining and surprisingly well developed characters, full of laugh out loud humour and snappy comebacks. Nora (Samantha Ireland – Once You Leave) is hilarious and her partner Ren (Monty Oum – Red vs. Blue) is the perfect straight man. Team JNPR is finished by Jaune (Miles Luna) who is a bit rubbish and Pyrrha (Jen Brown) who is a champion fighter.

RWBY draws heavily on anime for it’s inspiration and although it is American, it does capture the essence beautifully. Being used to animation, the CG takes a little time to adjust to and gives the whole affair  the feel of a computer game, however, this just adds to the distinctiveness. 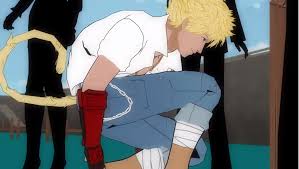 The use of colour coding is also very effective and makes the awesome fight sequences easier to follow as you can tell at a glance who is who.

In addition to all the humour, there are serious elements to the story, which covers all sorts of issues, including bullying and prejudice in the form of the human treatment of the Faunus, which has lead to the formation of White Fang, a terrorist organisation.

RWBY is visually stunning and a great story and even if you have seen it on Youtube already, this awesome animation is well worth owning on Blu-ray.

“So you may prepare your guardians. Build your monuments to a so-called free world. But take heed, there will be no victory in strength.”