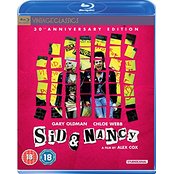 Writer/ Director Alex Cox (Repo Man, Straight to Hell) brings us what I believe is the seminal punk film, telling the events of the late 70’s surrounding the members of the punk band the Sex Pistols. 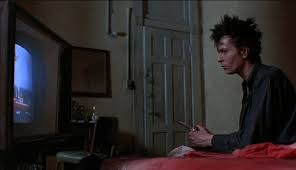 Hotel Chelsea New York the 12th of October 1978 and Sid Vicious (Garry Oldman, Leon, The Dark Knight Rises) sits on a blood soaked bed as the police ask him who called 911. As a body-bag is taken out of the seedy hotel room.

Sid is taken away for interrogation as the film ponders the events that led to this situation.

London UK Sid and Johnny Rotten (Andrew Schofield, Hamlet) are headed for Linda’s (Anne Lambton, American History X) place where she entertains her special paying guests. But today she is just getting stoned with her

American friend Nancy Spungen (Chloe Webb, Twins) who is a full time groupie and sex addict. When she fiinds out that Sid and Johnny are in the Sex Pistols she is over them and wants to see them play.

Malcolm McLaren stands outside the Paradise Review bar touting for business as X-ray Spex play on the stage as the Sex Pistols get ready to take the stage. 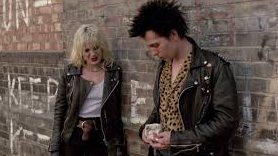 Nancy tries to get into Johnny’s pants back at Linda’s after the gig but he wants none of it nor does Sid. Everybody treats Nancy badly and this upsets Sid who has a growing affection for her, but she mainly has a drug score in mind and Sid wants to join in. This is where it is sugested that it was Nancy that got Sid into heroin.

What comes next is the rise and fall of the Sex Pistols and Sid Vicious.

For those of us that were there, these times were life forming. and now this film is remastered and Blu-ray it is a slice of history that was experienced with every sense. Now relive the punk scene with the great sound track and the excellent performance of Oldman and Webb along with other band member Steve Jones (Tony London, 24 Hours in London) and Paul Cook (Perry Benson, This is England) change the coarse of musical history.

“Sid! Sid! What about the farewell drugs? Sid!” 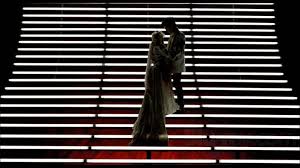