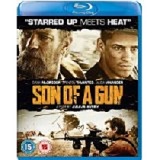 This is Julius Avery‘s full length writing/directorial début and it does show, it doesn’t quite hold the watchers attention all the way through. It tries to be two separate entities in one film, a prison film and a heist movie. Don’t get me wrong this is a great début and a great opportunity to show his skills, it just needs to be honed, especially with the talent available on his doorstep.

JR (Brenton Thwaites, Oculus, The Giver) has been a bad boy and he’s been sent down for six months. At nineteen, he isn’t all that worldly wise and sees that his cell-mate (Kazimir Sas, Teesh and Trude) is the plaything of a gang of inmates run by Dave (Sam Hutchin). JR knows this is wrong and he wants to help but he isn’t in a position to do anything. But there is a man who can,

Brendan Lynch (Ewan McGregor, August: Osage County), Australia’s most notorious criminal. When Dave turns his attentions to JR, he needs to find a way into Brendan’s gang and chess is his key as Brendan is a fanatical chess player, even doing it via letters to the outside.

But this protection comes at a price, help on the outside. So six months later JR walks free and heads for the big city where he is to meet Sam (Jacek Koman, Australia) the crime-lord, where he is given his instructions.

At his apartment he comes in contact with Tasha (Alicia Vikander, Ex Machina) a girl owned by the wealthy Sam.

JR follows his instructions and soon he is hovering over the prison in a helicopter to spring Brendan and his pals. Now it becomes a heist movie as they have plans to steal a lot of gold from its source. But is there honour between thieves, “Unlikely”.

All in all a watchable film as McGregor and Thwaites hold it all together with their acting skills.