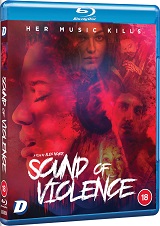 Sound of Violence is written and directed by the highly talented Alex Noyer, a very impressive directorial debut, based on his short film Conductor.

It enjoyed it’s UK premiere at FrightFest and is released on DVD, Blu-ray and Digital Platforms on 30th August 2021.

“My name is Alexis and when I hear certain sounds, I don’t just hear them, I see them and the very first time it happened my whole life changed.” 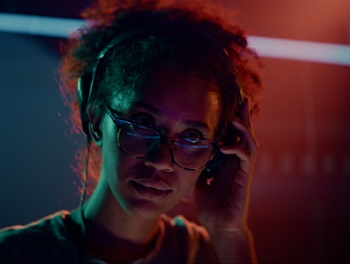 Alexis (Kamia Benge – My Cousin’s Couch) is a young girl who lost her hearing in an accident. She has learned to sense her surroundings using vibrations. Her father (Wes McGee – A model kidnapping) returns home from his tour of duty a changed man and when she feels banging noises, she goes downstairs to find her father brutally beating her mother (Dana L. Wilson – Dexter, Rutherford Falls) to death. She takes a meat tenderiser and smashes it into his head and her hearing returns with a rush of sound and colour. 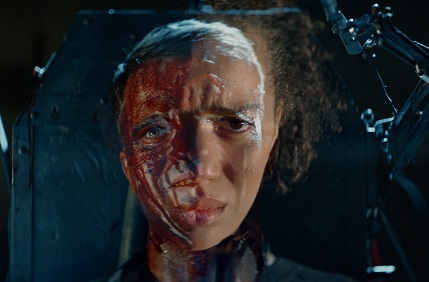 Now a young adult, Alexis (Jasmin Savoy Brown – For the People, The Leftovers) has decided to pursue a career in music and is working on experimental ways of making sounds. Left with synesthesia following the tragedy as a child, she is constantly searching to recreate that sensation.

Unfortunately for everyone else, the only way she can do this is through the sounds of bloody violence and brutality. 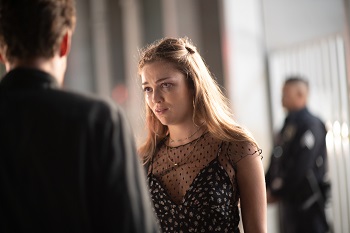 She is unwittingly helped out by her roommate and casual girlfriend Marie (Lili Simmons – The Purge, Bad Match), who helps her to source the required recording equipment.

With the chance of losing her hearing again looming and jealous of Marie’s new boyfriend Duke (James Jagger – The Deep House, Caged), Alexis embarks on a blood soaked rampage in order to try and complete her Magnum Opus.

“The precision. The overkill. It’s not over.”

Sound of Violence is an excellent horror film, ultra gory and violent and most certainly not for the faint of heart. It’s a great idea for a story and well realised, with well developed characters and a fabulous performance from Jasmin Savoy Brown, who somehow manages to make her psycho serial killer character likeable. 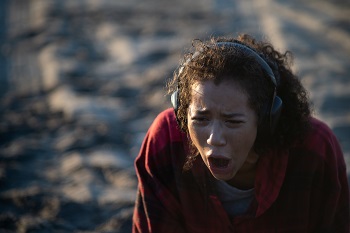 It is a dark and deeply disturbing film, and yet the way the violence is intermingled with the music and the swirling colours is fascinating. You most definitely need a strong stomach for this one, the images and sounds are extremely graphic and should satisfy even die-hard gore hounds. It builds beautifully to it’s devastating and utter unpredictable finale.

An emotional rollercoaster, well worth adding to your collection if you are a fan of the genre.

“You know, I taught a class this week about how beats are a language to tell stories.”