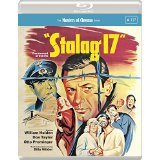 Legendary writer/ director Billy Wilder (Some Like it Hot, Sunset Boulevard, Double Indemnity, The Apartment) combines with Edwin Blum (The Bamboo Prison) to write the screenplay of Donald Bevan‘s and Edmund Trzcinski‘s stage play to bring us two hours of dark comedy.

The film is set in a German prisoner of war camp, Stalag 17, in December 1944, a camp for Sergeants only. When you put six hundred and thirty of them into one camp, that can only mean trouble, as narrator Sgt. Clarence Harvey ‘Cookie’ Cook explains.

Being World War II, Cavalry men are no longer as important as they were in the Great War and that is why a sour Oberst von Scherbach (Otto Preminger, I’ll Cry Tomorrow) runs the camp with an iron fist. As we know from films that came later, it is the duty of every prisoner to try and escape and get back home to start again. So every effort goes into helping Manfredi (Michael Moore, Pony Express) and 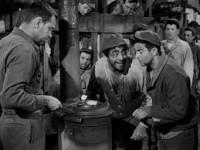 Johnson (Peter Baldwin, The Wonder Years) get out through the tunnel that has been carefully dug within the washhouse to get them out to the forest beyond. The safety officer in charge of the escape

plans is Frank Price (Peter Graves, Mission Impossible (tv)) who makes the guys go through the whole plan over and over to make sure they know which way to go to get to freedom. 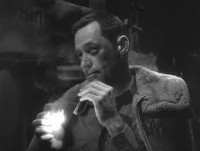 When they are on their way, J.J. Sefton (William Holden, Towering Inferno) pipes up that he will bet a packet of cigarettes that they won’t make it out of the forest, much to the annoyance of the fifty seven other members of hut 4. Enraged at this spiv, they take the bet and when the sound of machine-gun fire is heard a few minutes later Sefton collects all his winnings along with his sidekick ‘Cookie’ (Gil Stratton,

Girl Crazy). Still unsure of the actual outcome, Sefton offers a double or quits option which doesn’t go down well, sparking accusations of him knowing what the Germans were going to do as there seems to be a stoolie within this hut. The loudest accusations come from Duke (Neville Brand, The Return) who muscles in on Sefton, but he is a cool customer and fends off all the flak. Fears are confirmed at roll call when Shultz (Sig Ruman, Houdini) their hut supervisor raises them at 6am.

With the bodies of their comrades lying in the mud, they all take a mental 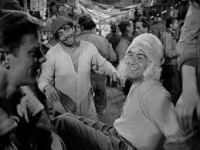 picture of what it is like to have a spy in the camp, but there are 58 possible suspects. I said this was a dark comedy and it is. We meet the other inhabitants of hut 4, such as ‘Animal’ (Robert Strauss, Girls! Girls! Girls!) and his best buddy Harry (Harvey Lembeck, Beach Party) as they head for the prospect of another Christmas behind the barbed wire of Stalag 17. 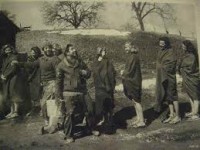 This is the performance that won Holden Best Actor in a Leading Role and deservedly so, as the interactions with the other hut-mates (loose term) is excellent and draws you in, interspersed by the antics of Animal, Harry and Shultz as they strive to find out who is putting them all in danger, whilst the female Russian camp keeps them all distracted, come delousing time. 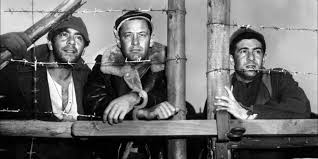