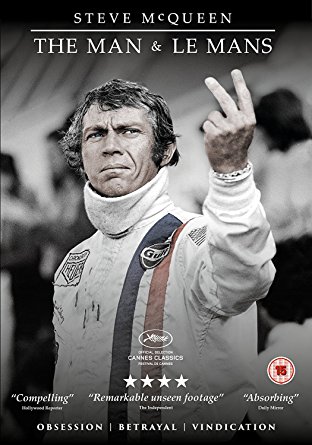 The man, the legend that was Steve McQueen, a superstar from humble beginnings on a farm in Missouri. A box office certainty, he had a vision of the ultimate speed film and that it was going to be about the ultimate race, ‘Le Mans’. Directors  Gabriel Clarke and John McKenna (The Fight of Their Lives) bring us the real story of the man, the film and those that were there came out the other end of this seminal film.

This documentary features unheard of Steve McQueen and boasts that allegedly one million feet of film was shot, it was presumed to have been lost or destroyed. Until Now.

We hear from Alan Trustman the writer of a couple of Steve McQueen’s biggest films (The Thomas Crown Affair, Bullitt) about how Hollywood goes about making a film and how in 1969 Steve had the drive to make his Le Mans film even though it didn’t have a script.

His first wife Neile Adams McQueen tells how they went and built an empire as Steve forms Solar productions Inc to make the film and he becomes executive producer and drafts in the great director John Sturges (The Great Escape, The Magnificent Seven, The Eagle has Landed). 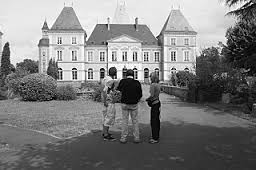 Steve’s fascination with speed leads him to take part in America’s premier endurance race, the Sebring 12 hour race in Florida, where he came second. This meant he was taken seriously by the racing drivers at the top level of racing. But Steve managed this feat with a broken ankle and the winner used two Ferrari’s.

What really annoyed Steve was that in 1966 James Garner starred in Grand Prix and that stole the thunder for his film. As Steve lived above Garner, at night he would go out on his balcony and urinate down onto Garners plants and later in his film notes he wrote. “You p*ssed on my film, now I p*ss on you.”

Solar take over a small village in France before the filming begins and they draft in the drivers from the recently run Le Mans race, to race alongside Steve, Derek  Bell, Jonathan Williams, David Piper.

The McQueen’s rent a château and the young Chad is smitten with speed as he explains his first encounter with the residents of the château.

When you have 600 horsepower cars and 30 gallons of gasoline, life is cheap for a racing driver, in an era where they expected to lose two or three of their fellow racers per race, everybody concerned was taking a big risk in making this film as Solar had come up with ingenious methods of filming Steve’s dream.

The filming begins, Steve races with the other drivers at speeds of up to 248 mph and the camera cars capture the drama and speed superbly.

The rest is history, a film that changed some people’s lives forever and it is all captured on this superb release, a true petrol heads documentary on a slice of cinematic history and of the man who had no fear.

The one and only Steve McQueen. 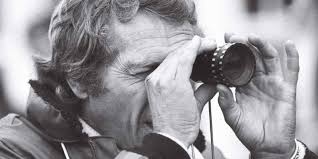