From the writer/actor and director Derek Yee (Protégé), he brings us a classic tale of testing your mettle to prove your self taught skills are the best and why you shouldn’t follow the family path and the problems of unrequited love. All told with amazing sword skills and wire work. A tale of two men destined to meet, this is their journey to that end.

means it goes into the annals of time. A clan sword master stands alone on a large bridge above a frozen river, he awaits an assassin
Yen Shih-San (Peter Ho, The Monkey King) a self taught sword master who takes jobs from anyone and is not aversed to killing in an un-honourable way, but tonight he must test his Kung Fu against an established sword master.

After defeating the sword master Yen meets Chu, a pageboy for Madam Mu-Yung Chiu-Ti (Yiyan Jiang, Reign of Assassins). She had sent an assassin

to kill someone, she put up 100,000 Taels for the job, but he failed and what is she to do, she was spurned at the alter not once but twice. This man is the 3rd Master (the best sword master in the world) Hsieh Shao-Feng (Kenny Lin, The Great Wall) and he resides at Green Lake under Jade Peak.

A chance to face the 3rd Master is more than Yen can pass up, even more than the fortune.

He is met with the most powerful Sword Mountain Clan the head of Kung Fu in Martial art world. But something happens that totally changes Yen’s life.

Meanwhile a drunken undesirable wanders into the Dawn Moon House, a

drinking and whoring establishment run by Madam Han who works for the Big Boss. He has lots of money though and that speaks louder than the stench. But five days later he is out cold from his binge. Madam Han is told that he has no more money and she puts him to work and calls him Ah Chi.

He meets Hsiao Li (Mengjie Jiang, Lost in the Pacific) an ambitious young prostitute who is willing to do anyone for the right money.

Ah Chi just wants a simple life and doesn’t want any confrontations and after Chi gets stabbed while trying to get two non paying clients to pay Li, Madame Han is impressed and mentions Chi meeting the Big Boss, he does a runner.

The two men are getting closer together and the other clans want to see the end of the Sword Mountain Clan and rule the land as despots and a travelling swordsman is supposed to look after the poor. Will Yen ever get to meet someone to test his skills upon?

A great film with leaping and sword fighting, bitter rivalries and a women scorned. and with a good twist to set this film above many others. 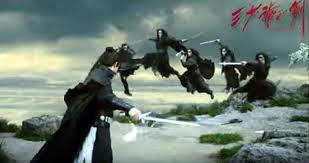