The Intrigues of War.

From actor, writer, director King Hu (Legend of the Mountain, All the King’s Men) comes a tale of fourteenth century China when the Monguls rule with an iron fist and the people have had enough and are fighting back under rebel Chu Yuan-Chang’s army. With choreography from the legend that is Sammo Hung (Wheels on Meals, Three Films With Sammo Hung) you are in for a Martial Arts treat.

Emperor Yuan of the Yuan dynasty (year 1366) is fighting against the rebels and he sends his official Lee Khan to get Chang’s battle plans that have been stolen by a spy within his camp.

It all takes place in and around an Inn run by Wan Jen-mi (Li Hua Li, The Legend of Mother Goddess, The Goddess of Mercy) and she hires four new waitresses, that all have a dodgy pasts.

Also a man and his musical servant that pose as a bookkeeper, but there are spies from both sides trying to work out who is who.

With the local magistrate always lurking around the Inn it is hard for the rebels to make their move, in weeding out all the emperors men.

Eventually Lee Khan (Feng Tien, A Better Tomorrow, A Time to Live and a Time to Die), his sister princess Wan’erh (Feng Hsu, The Longest Bridge) and general Cao turn up, it all intensifies.

Cloak and dagger with Kung Fu thrown in. Brilliant.

Another classic from Eureka. 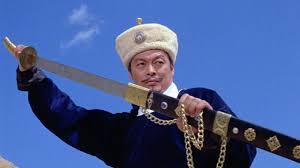 The Fate of Lee Khan is available on Blu-ray