2 stars for this vaguely creepy but ultimately disappointing horror film. 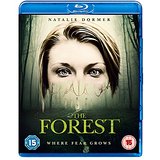 The Forest is the directorial debut of Jason Zada, best known for writing The Houses October Built. Although it is a valiant effort, the lack of experience clearly shows here.

“Do not leave the path…” 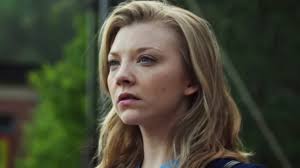 When she receives a telephone call from the school at which her sister teaches in Tokyo, informing her that her sister has been reported missing, she packs her bags and heads for Japan.

Upon arrival, she begins her investigations. She finds that her sister was last seen heading for Aokigahara Forest, a notorious suicide spot at the base of Mount Fuji.

Not willing to believe Jess is dead as her twin sense tells her she’s still alive, she makes up her mind to find her. All of the locals are of the same opinion, the forest is haunted by “yurei”, Japanese ghosts who wish to make people kill themselves. 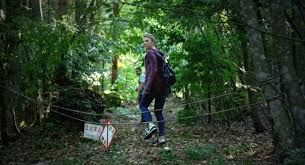 As luck would have it, whilst in the local pub she meets an Australian journalist, Aiden (Taylor Kinney – The Other Woman), who is familiar with the area and knows someone who acts a s a guide to the forest.

She jumps at the chance to accompany them and so together with their guide Michi (Yukiyoshi Ozawa – The Hidden Blade) they head off into the depths of the forest to search for Jess.

Of course, this being a horror film, things are never that easy and before too long she is lost in the forest and discovering that maybe she has a few demons of her own to deal with. 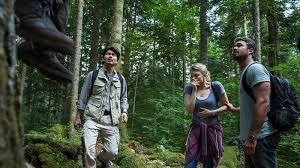 The Forest sounds, on the face of it, to be a great idea for a film. There are however a number of issues which hold it back. The lighting isn’t very good, which means that instead of immersing yourself in the story, you’re instead trying to work out what’s going on. This means the jump scares don’t really work, because you can’t concentrate enough on the story.

Although the acting is excellent, the story lets it down. No intelligent woman would simply wander off into a remote forest with a man she had just met, nor would he risk his life to save her, it’s just all a bit implausible.

Somehow, although it is filmed in perhaps one of the creepiest places on Earth, there is little or no atmosphere to it. The fact that it isn’t found footage works to it’s advantage, but the story loses coherence as it goes through and by the end has lost it’s way entirely.

It is watchable but I wouldn’t rush to watch it again.

“Do you know why ‘do not leave the path?’.Because, if you get lost and you have sadness in your heart, they will use it against you. The Yurie come find you and make you see things, make you want to die…”

The Forest is available now on DVD, Blu-ray and Digital.