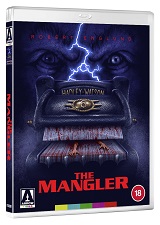 The Mangler is based on a short story of the same name by Stephen King (Doctor Sleep, Pet Sematary), taken from the short story collection Night Shift. This film adaptation was directed by Tobe Hooper (The Texas Chainsaw Massacre, Poltergeist) and was originally released in 1995. It is presented here on Blu-ray following a 2K restoration courtesy of Arrow Video. 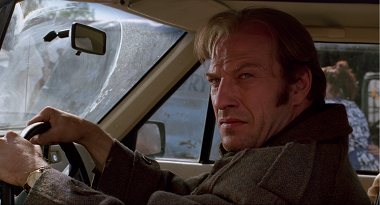 The Blue Ribbon Laundry is the life’s blood of Rikers Valley, ‘the Industrial heart of Maine’, providing lots of employment for the town. Owned by the very intense Mr. Gartley (Robert Englund – A Nightmare on Elm Street, Stranger Things) all seems well until one day when his niece Sherry (Vanessa Pike – Never Say Die) accidentally cuts her hand and spills blood on the ‘Speed Iron’ or laundry press. 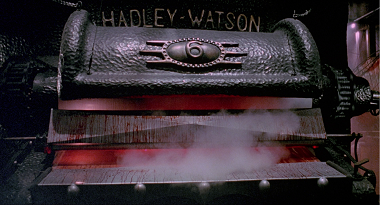 Almost immediately afterwards, the unfortunate Mrs. Frawley (Vera Blacker – Killer Instinct) is sucked into the press and neatly folded and ironed like a sheet, much to the horror of the other girls and the foreman Stanner (Demetre Phillips – 976-EVIL, Gas Pump Girls).

Called out to the scene is Officer John Hunton (Ted Levine – The Silence of the Lambs, Monk) who is horrified by what he sees. When another accident involving the machine lands Annette (Ashley Hayden – Terminator Woman) in the hospital, he begins to see a pattern developing.

Together with his occult loving demonologist brother in law Mark (Daniel Matmor – V/H/S/94, Beginner’s Luck) and his enigmatic photographer friend Pictureman (Jeremy Crutchley – American Gods) they begin to investigate Gartley and his mangler. Could there be something more sinister at play here?

”It folded her like a sheet. They carried her out in a bucket.” 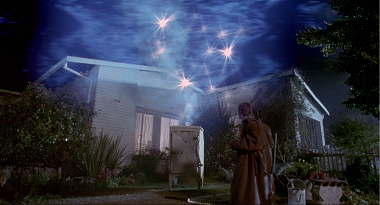 If this sounds like a ridiculous idea for a story, that’s probably because it is. That’s doesn’t however stop it from being enormously good fun to watch. The way that people find themselves inexorably sucked into a mangle which doesn’t move is fascinating as well as highly amusing.

There are some very surreal moments, the best of which must be the accidental creation of an angry and hungry ice box. The acting isn’t great but the special effects are very enthusiastic and the whole thing is extremely noisy and coated in liberal quantities of blood.

It’s well remastered with lots of special features and is a must own for those who are nostalgic for the silly gore fests of the nineties.

“You know, it’s almost like that machine had tasted blood and found it liked it. Don’t women get funny ideas sometimes?”

The Mangler is available to buy on Blu-ray from 10th January 2022.