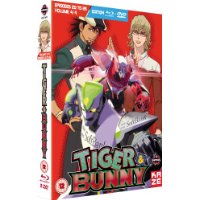 For those not familiar with the franchise, Tiger and Bunny is set in a world where law and order is maintained by super heroes, called “Next“, people who have unique abilities and who are offered corporate sponsorship to fight crime on camera for the news network Hero T.V 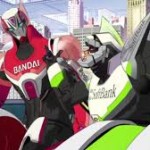 Kotetsu T. Kaburagi, a.k.a. Wild Tiger (Hiroaki Hirata – Naruto: Shippuden, One Piece), works alone, that is until he is partnered with Barnaby Brookes Jr. a.k.a. Bunny (Masakazu Morita – Bleach, One Piece) a rookie with a very different approach to being a super hero.

This final instalment takes us to the end of the story, the evil Albert Maverick (Nobuaki ) has erased the memory of the existence of Kotetsu and it is up to him to try and get his fellow super heroes to recognize him again.

The animation is very nicely done and is artfully mixed in with 3D CG to give it depth and detail. The story-line is sharp and well written and this is a very good climax to what has been an excellent series.

For those who don’t enjoy subtitles, this comes with an English translation starring Wally Wingert (The Garfield Show, Family Guy) as Wild Tiger and Yuri Lowenthal (Ben 10, Shelf Life) as Bunny.

Great fun this, a good watch and suitable for the whole family (12 certificate), thoroughly recommended and well worth adding to your collection, even if you haven’t seen the rest of the series.