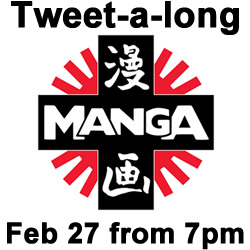 Here is the latest opportunity, following the success of Manga UK’s last tweet-a-long in January, when anime fans sat down to watch the same film, Wolf Children, together.

Not only did a lot of people watch the same film, they also had the chance to comment about what was happening and share their own experiences of the film in real time.

This time it’s going to be Magi – The Labyrinth Of Magic!, a fabulous series with a strong feel of Arabian nights, with a twist.

All you need to take part is a copy of the DVD or ,if you wish, the Blu-ray version.  It’s simple.  The last time this happened with Wolf Children, the hashtag managed to trend in the top ten for UK tweets!

The event isn’t only going to be a simple tweet-a-long but you will also have the chance of winning some great prizes from MangaUK’s great back catalogue!

To join in with the Magi Tweet-a-long all you need to do is:

This is the first time MangaUK’s tweet-a-long is for a series, as all of the previous events have been films, like K-On! The Movie in October and Wolf Children in January.

A great way to spend an evening, enjoy the first three episodes and share your thoughts on a great new series with like-minded people, as it happens!

See you there folks!