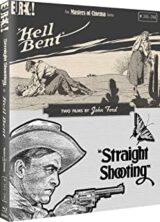 A Cowboy From the Silver Screen.

From the screen legend that was John Ford (The Grapes of Wrath, Two Rode Together, Rio Grande, My Darling Clementine, The Quiet Man, The Man Who Shot Liberty Valance) comes two films from his early career, thanks to the NBC Universal Studio Post for recovering these two silent screen horse operas. Apart from them being in black and white and silent, you will not believe that these films are over a hundred years old. Marvellous job. A true piece of cinematic history brought back to life. This Blu-ray is Eureka’s release #245 – #246, thank you very much. 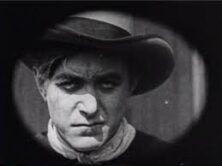 The main star of these two films is Harry Carey (Red River, Judith of Bethulia, The Man from Texas, Duel in the Sun), one of the superstars of silent screen horse operas. He plays the drunk gun-for-hire Cheyenne Harry, a role which he reprises more than twenty times (1917-1919), so he definitely got the girl more than twice.

Many a film has been made about the struggle between the Cattleman and the Homesteader, but this one is most probably one of the first. With a score by Michael Gatt which  keeps the film bobbing along and adds those moments of melodrama.

Sweet Water Sims (George Berrell, The Trail Rider, The Man from Montana) has done his travelling, and now he is the head off the

homesteaders, along with his son Ted (Ted Brooks, Sundown Slim) and his daughter Joan (Molly Malone, Blaze Away, The Knockout Kid). His rival is cattleman ‘Thunder’ Flint, and he hates the settlers and their buildings and barbed wire stopping him running his cattle. Flint has a cunning plan, he is 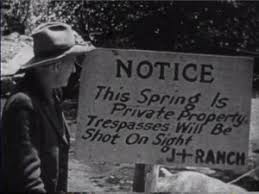 going to fence off Sims water spring and sit in wait for the next fool to try to get water, and that fool is Ted who comes to a swift end due to Flint’s Winchester rifle. Not satisfied with that result he also hires gunslingers Cheyenne Harry and Placer Fremont (Vester Pegg, The Struggle, Bare Fists) to help him run the settler off the land permanently. Will Cheyenne be as ruthless as he has in the past or will he fall for the damsel in distress? (You know the format).

Hell Bent sees Cheyenne return, but he is the only character we recognize as 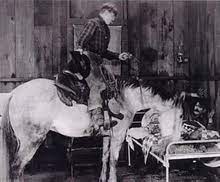 he drunkenly swaggers across the room. To be honest the horse steals the show at the start (didn’t get their name) as he flees a town where he left people dead after accus

ations of cheating in a card game. He crosses the river to find himself in the town of Rawhide. The Hotel/bar is full and raucous and the only bed available for doubling up is in Cimmaron Bill’s  (Duke R. Lee, Adventures of Texas Jack, The Scarlet Brand) room so Harry rides his horse straight up and into 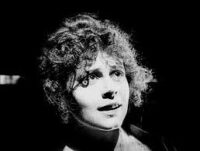 the room where they settle the sleeping arrangements between themselves (guns are waved). Elsewhere in the town, Bess (Neva Gerber, The Range Riders, California in ’49) and her good for nothing brother Jack Thurston (Vester Pegg) are struggling for money to help their poorly mother and feed themselves. Jack at the moment works for Wells Fargo company and Beau Ross (Joe Harris, Sure Fire, Humdrum Brown) and his band of robbers are always after their gold shipments (some might say that is taking the easy way out).

To make ends meet Bess (Mary) takes a job at the hotel where she catches Cheyenne’s eye and also the other outlaw Ross (you can see where this is going).

It is great and a privilege to see films this old and looking so good, a must for the cowboy/girl of the family and anyone who is into film history and a legend of a director. 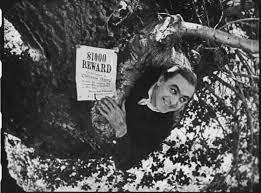