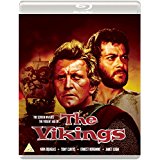 Swords, Shields and the Feared Northmen.

Famed film director Richard Fleischer (Conan the Destroyer, 20,000 Leagues Under the Sea, Tora,Tora,Tora, Doctor Dolittle, Fantastic Voyage) brings us his historical tale of blood and guts and a true inheritance in the waiting. Now fully brought up to Blu-ray quality by Eureka Classics. Including many features and a new booklet.

It is dark times in the East of England, Northumbria to be precise, and it is the

little villages around the castle that live in fear of the vicious raping and pillaging raids by the Vikings who take everything from supplies to the woman and male slaves. The leader of these raids is Ragnar (Ernest Borgnine, The Dirty Dozen) the head of a village of Vikings in the Fjords of Norway. During the last raid Ragnar kills the King of Northumbria and rapes

the Queen before getting away with his ill-gotten gains.

Meanwhile back in ravaged England the Northumbrians have a quandary, as the King died without an heir so his cousin Aella (Frank Thring, Ben Hur) is declared King. But at his coronation Enid (Maxine Audley, Running Scared) the former Queen reveals to a monk that she is with child, Ragnar’s child. During the ceremony the sacred sword is passed to the new King but the pommel of the sword falls off, a bad omen.

Knox, Gorky Park) recommends that the boy should be sent to a monastery in Italy, she agrees but before he departs she puts the royal sword pommel around his neck. But on the way there the boat is captured by the Vikings and taken into slavery.

rumble the royal court. The Welsh King brings his daughter Morgana (Janet Leigh, Psycho, The Fog) to the Northumbrian court to have an alliance by way of marriage, Aella agrees and they are to wed on the first day of spring.

In Norway Ragnar’s son Einar (Kirk Douglas, Spartacus) is out hunting with his hawk and a British traitor, Egbert (James Donald, the Great Escape) who was given sanctuary by Ragnar. Einar isn’t successful but somebody else is. He goes in search of the other hunter and it turns

out to be two slaves with a hawk, but how can slaves own a hawk? The owner of the hawk sets it on Einar and it attacks his face clawing his eye. The man turns out to be Eric

(Tony Cuirts, Some Like it Hot) and his deaf and dumb friend Sandpiper (Edric Connor, Moby Dick).

This encounter sets off a big rivalry and he is brought before Ragnar and Egbert and when Einar rips off Eric’s medallion and throws it on the floor Egbert recognises it but says nothing and starts planning his return to England. They are about to kill him when the soothsayer Kitala (Eileen Way, Vendetta for the Saint) says that who ever kills him will incur the wrath of Odin. So they let the crabs do the job by throwing him into a tidal pool.But when Eric calls out to Odin the winds blow and reverse the tide thus saving Eric. Now that he lives there is trouble in the air and adventures take place and a woman’s love causes even more rivalry.

A classic adventure film and now everybody can see it Blu-ray.

Definitely one for your top shelf.