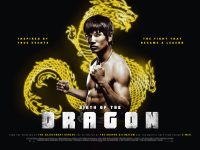 With his directorial début back in 2011 where he also wrote the screenplay for the Hollywood blockbuster The Adjustment Bureau, (George Nolfi) now we see him take on the story of the Martial Arts Legend Bruce Lee and his brash beginnings teaching white people Kung Fu in San Francisco US of A against the beliefs of the Shaolin monk Wong Jack Man.

It is 1964 and a youthful Bruce Lee (Philip Ng, Zombie Fight Club) runs a  dojo in San Francisco, teaching his western students Wing Chun.He supports them in the burgeoning Kung Fu film and TV industry against the local organised crime syndicate.

But in 1963 back in China, Shaolin Monk Wong Jack Man (Yu Xia, Mojin – The Lost Legend) is taking part in a demonstration match where after feeling humiliation he uses the full contact Mon Shan move against the Tai Chi master

in Henan and nearly kills his opponent. For his penance he travels to San Francisco to become a dishwasher.

When one of Lee’s trainees Steve McKee (Billy Magnussen, Revenge of the Green Dragons) spars with Lee he gets humiliated because he uses anger rather than training. McKee and Vinnie Wei (Simon Yin, Covert Operation) work for the latter’s mother’s laundry business, where they find out that master Wong Jack Man (Xia Yu) is on a pilgrimage from China to observe the Kung Fu scene in the United States. While carrying out a delivery to the

China Gate restaurant, McKee falls for an employee, Xiulan (Jingjing Qu, Old Boys: The Way of the Dragon), who is forbidden to communicate with anyone on the outside. One night, McKee sneaks over to the restaurant to give her a grammar book, teaching her fellow room-mates basic English.

With Man in the country and talking to Man he is worried why is he here, is it because he is training Westerners or something more personal? The Long Beach

International Karate Championships is coming up soon and Lee wants to demonstrate his skills against the well established martial arts. This is where he demonstrates his now famous one inch punch and where he spots Man and challenges him to prove who is the best.

Stand back for the fight of the century as new goes up against the established, throw in love, slavery, and gangsters and we have a very enjoyable Martial Arts classic in the making.

Birth of the Dragon is in Cinemas 23rd of February 2018