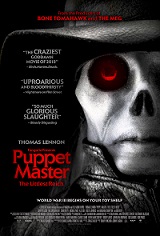 Puppet Master: The Littlest Reich is a reboot of the long running and popular Puppet Master franchise. It is brought to UK cinemas courtesy of “Fangoria Presents” and is based on characters created by Charles Band (Doll Graveyard, Puppet Master) and Kenneth J. Hall (Terror Night). It is written by S. Craig Zahler (Bone Tomahawk) and directed by Sonny Laguna (Wither) and Tommy Wiklund (Animalistic).

“Well, you definitely seem like a toy only a maniac would pick.” 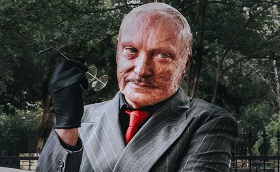 The film opens with a very shady character, Andre Toulon (Udo Kier – Downsizing, Blade) in a bar in Postville, Texas. He takes offence at the lesbian bar tender and before we know it, she is decapitated in her car by what very much looks like a puppet and his house is raided by police, amid much shooting and commotion.

Thirty years later Eddie Easton (Thomas Lennon – Santa Clarita Diet, Lethal Weapon) recently divorced, has moved back in with his parents while he gets his life in order. 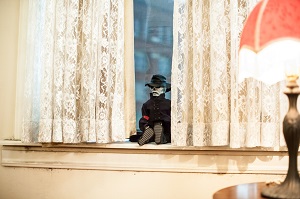 He has a career drawing comics and works in the local comic book store with best friend Markowitz (Nelson Franklin – Black-ish, The Office) and he is thoroughly fed up of his life.

Things start to look up when he finds a puppet that belonged to his late brother hidden in a box in his wardrobe. Upon further inspection it appears to be a Toulon puppet and thus quite valuable. Who wouldn’t be pleased to find a puppet that can shoot razor sharp knives out of its hands? As luck would have it there is a convention coming up in Postville to celebrate the 30th Anniversary of the Toulon massacre, at which a lot of the owners of his puppets with be auctioning them off for a fair amount of money. 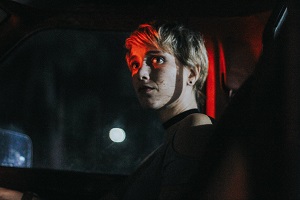 He also meets new girlfriend Ashley (Jenny Pellicer – Viena and the Fantomes) and together with Markowitz they take a road trip to the auction. However, all hell breaks loose at the Brass Buckle Hotel when a mysterious force brings the assembled Nazi puppet collection to life!

Puppet Master: The Littlest Reich is a very entertaining film to watch. The special effects are pretty good with some extremely gory and very inventive ways for the puppets to kill people. There is more than enough violence and blood to satisfy the ardent gorehound and plenty of comedy too, which is good because if it took itself seriously this really wouldn’t work.  The acting is also  pretty good with a welcome appearance from horror legend Barbara Crampton  (Re-animator, You’re Next). 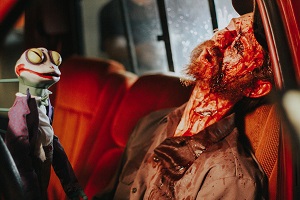 I love the idea of Nazi puppets starting World War 3 and targeting minorities much as they did before. There is very little explanation as to what is actually happening or why, but none is really necessary and the way is left nicely open for a sequel. Well worth adding to your collection, just don’t watch it while you’re eating!