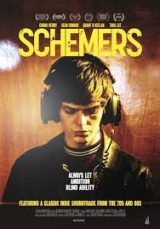 Based on a true story, Dave McClean‘s story, he has written, directed and produced the story of a young lad from Dundee, Scotland. He takes the hard  knocks of youthful exuberance and turns them into a pipe dream and runs with it, at a time that British music changed the World.

The film starts with a cautionary tale.

“The music industry is a cruel and shallow money trench, a long plastic hallway where thieves and pimps run free, and good men die like dogs.”

“There’s also a negative side.”

With a narrative from Davie himself we travel back in time to 1979 when the iron lady held power, a film star was the president and rockstars were shot.

The old-way and the new wave.

The City of three J’s and a young Davie (Conor Berry) is a dab hand in the bookies and with his winnings he is off to find a drunken student at the Uni bar. He is successful and back at her house things get steamy until her other half comes home from jail to find our young stud about to get his ill-gotten gains. Needless to say, he flees from the Charles Manson look-a-like, Malky (David Izatt, The Necromancer), who manages to get his revenge on Davie when he spots a report in the local rag about a youth football team and a star player called Davie.

A journey of a thousand miles starts with a single step.

Davie full of Morphine lies in a hospital bed with his Father Wullie McClean (Kit Clark) and his mother Moyra (Carolyn Bonnyman, Urban Ghost Story) by his side and the cheerful (not) Wullie saying how his football career is over, and he’ll sort out a normal job 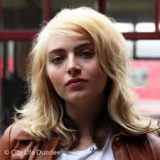 for his son, while mother says things will be fine. This is where he meets his muse in the form of student nurse Shona (Tara Lee, Moon Dogs), who will take care of him. Davie believes he has seen the light and spins Shona his best sonnet, (nearly).

And that’s when I met her.

With crutches on board he heads to his local for a drink where he sees his mate Scot (Sean Connor, Anna and the Apocalypse) who saves Davies day when he has a run in with the still miffed Malky. They head off to have a few bevvies at the snooker centre and on with the night.

And there she was.

At a disco Davie spots the off duty Shona, as he stares longingly at her, the D.J. John (Grant Robert Keelan, Cold) points out that all the blokes do that but none really have the guts to talk to her. So the next day in the library he approaches her and her friends, but she isn’t impressed until he tells her that he was going to give her free tickets to the disco he is organizing.

Aye she called my bluff.

So to get his girl he needs to organize a disco and guess who’s going to do it? Davie, Scott and John. This is the start of their story.

If you are a certain age this soundtrack will float you back to a simpler time, if not you’ll envy every one of us who can. A cracking film with a brilliant soundtrack and superb way to start an acting career. The ups and downs of a man on the rise. (Music from the likes of Simple Minds, Saxon, Hawkwind, The Fall, The Associates, The Proclaimers, The Sensational Alex Harvey Band and Placebo).

Schemers is in cinemas on Friday 25th September