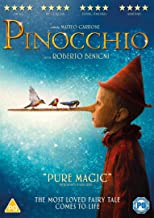 Pinocchio is an Italian fantasy film written and directed by Matteo Garrone (Gomorrah, Tale of Tales). It is based on the 1883 book The Adventures of Pinocchio by Italian author Carlo Collodi. It is presented here with both the original Italian language version with English subtitles and the English dubbed version, courtesy of Vertigo Releasing.

“Pinocchio. It’s me. I’m the talking cricket. I’ve lived here for more than a hundred years. I saw the way you behaved with your father and I want to tell you a great truth. Woe betide the children who disobey their parents. They never get very far in this world.”

Geppetto (Roberto Benigni – Down by Law, Life Is Beautiful) is a poor wood cutter inspired by watching a travelling puppet show to create a beautiful puppet of his own to make his fortune. He visits his colleague Mastro Ciliegia (Paolo Graziosi – Il Divo) to get some wood and he gifts him a piece he believes to be alive, to get rid of it. 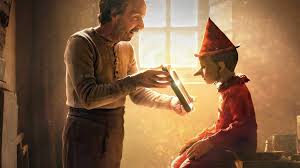 He carves a puppet and to his immense surprise it comes to life. Delighted, he decides that it will be his son and names him Pinocchio (Federico Ielapi – Don Matteo). The only problem is, Pinocchio is willful and immediately runs away, not interested in listening to his father. He meets a talking cricket (Davide Marotta – Phenomena) who cautions him but again he refuses to listen. 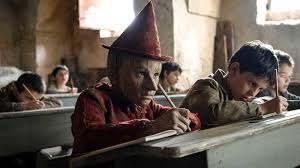 He embarks on a series of adventures and mishaps, encountering villains like the Fox (Massimo Ceccherini – The Cyclone) and the Cat (Rocco Papaleo – The Prize) who seek to take his money. Luckily, he also encounters some good people, like the Fairy with Turquoise Hair (Marine Vacth – Double Lover) and the Snail Lumaca (Maria Pia Timo – Brave Regazze) who help him on his journey and towards his goal of becoming a real boy. 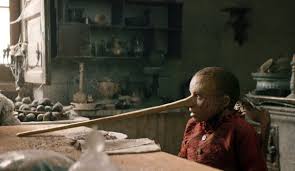 Pinocchio is an interesting film, very different to previous adaptations and much darker, being closer to the original story. Despite it’s PG certificate there are many deeply disturbing but highly effective scenes, warning about the perils of bad behavior and disobedience, including scenes of hanging, drowning and measuring for coffins. Discretion is advised.

The characters are larger than life and the effects are amazing. Pinocchio’s make up is good enough to appear CGI and yet is the work of fantastic prosthetic artists and the landscapes are glorious.

There are slight downsides, the film is over two hours long and it feels a bit drawn out and the episodic nature of the original story makes it feel a little disjointed.

It’s still a great film however, heart warming, ultimately uplifting and well worth adding to your collection.

“In this country, the innocent go to prison.”

Pinocchio is out now on Digital and on DVD from 14th December 2020.