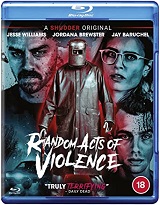 Random Acts of Violence is written by Jesse Chabot (Goon: Last of the Enforcers) and Jay Baruchel (How To Train Your Dragon, This is the End), who also directs and co-stars. It is based on the one shot graphic novel of the same name written by Justin Gray and Jimmy Palmiotti.  It is a Shudder original, which is now enjoying a physical release in the UK from Acorn Media International following it’s success on the streaming service.

“Every page drips with Walkleys’ tired brand of senseless violence and morally bankrupt teen angst. Slasherman’s nothing more than yet another toxic element of a dangerous culture that lionises male violence.” 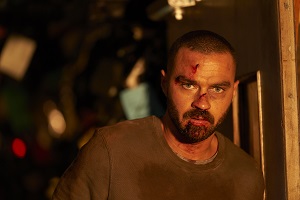 Todd Walkley (Jesse Williams – The Cabin in the Woods, Grey’s Anatomy) is a successful comic book author, well known for his very popular but highly controversial series Slasherman. This is a fictional comic based on the story of a real life serial killer known as the I-90 killer, who operated from 1987-1991 along a 200 mile stretch of that road. 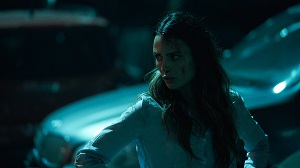 doesn’t yet have his ending, how do you conclude the story of  a serial killer? To find inspiration, he organises a road trip along the I-90, to look at the locations. It will also help out his wife Kathy (Jordana Brewster – Fast and Furious, American Heist) who is writing a non-fiction book about the killer concentrating on the victims. 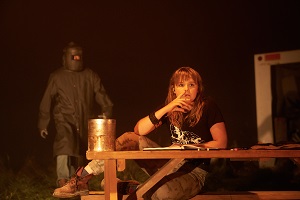 Accompanying them on this trip are Todd’s business partner Ezra (Jay Baruchel) and his assistant Aurora (Niamh Wilson – Saw III, Map to the Stars). There is tension from the start, as Todd and Kathy each feel that the other isn’t supportive of their work and Ezra is on Todd’s back about finishing the comic. 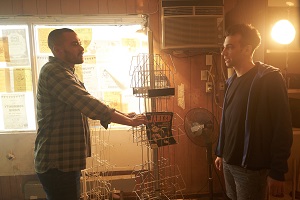 They will soon have bigger problems however, when a caller to a radio interview gives Todd a mysterious sequence of numbers and then a gruesome killing occurs which mirrors one of his drawings. Is there a copycat killer or a crazed fan on the loose and how will they survive with the line between life and fiction growing ever thinner?

Random Acts of Violence is a very good example of a slasher film. The violence is truly brutal, with blood and guts everywhere and will satisfy the cravings of any gore hound. 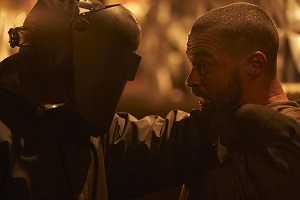 It also tries to take a more intelligent look at the genre and in that respect it almost succeeds. It certainly shines a light on the potential moral dilemmas inherent in taking real life crimes involving real victims and their families and presenting it as a form of entertainment.

Unfortunately, it loses its way slightly at the end and it all gets a bit silly (I think they got a bit carried away), but that doesn’t detract too much from the enjoyment of what is a well acted and well written film. Definitely worth a watch.

“Our friend is dead because of what came out of your f****d up head. That was in your head!”

Random Acts of Violence is available to buy on Blu-ray, DVD and Digital Platforms from 23rd August 2021.