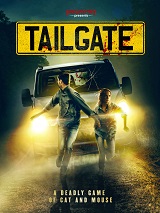 Tailgate is a Dutch horror thriller, originally called Bumperkleef and is written and directed by Lodewijk Crijns (Lap Rouge, Only Decent People). It is presented here with English subtitles courtesy of FrightFest Presents and Signature Entertainment.

“Now you’re going to apologise. To me, and then you go back to your vehicle and that’s all.”

His mother is pestering him constantly over the phone and getting his wife Diana (Anniek Pheifer – Turbulent Skies) and two children Milou (Roosmarijn van der Hoek – Mees Kees, Prey) and Robine (Liz Vergeer – The Windmill) into the car and on the road is proving to be a challenge. 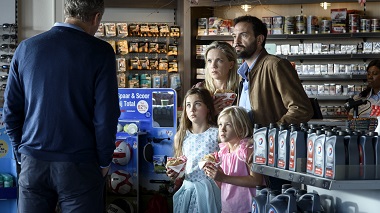 Once the journey is underway the bickering continues. He feels that Diana doesn’t want to go at all, the children are arguing over a tablet and he is speeding, much to his wife’s annoyance.

Just to top it all off, they get stuck behind a white van which insists upon keeping to the speed limit however much he tailgates and hassles him. When they finally overtake, they eyeball each other and Hans thinks that is the end of it. 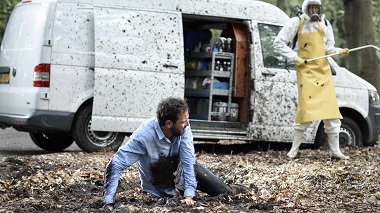 The driver of the van, Ed (Willem de Wolfe – Black Book) has other ideas and while they are stopped at a service station he confronts Diana and the children, leading to another confrontation with Hans. He still thinks he has the situation under control, but he has picked a fight with the wrong man and what ensues is a deadly game of cat and mouse.

Tailgate is a very enjoyable film, with highly effective tension building throughout and excellent direction. The acting is superb and the characters although occasionally unlikeable are very relatable and well written. 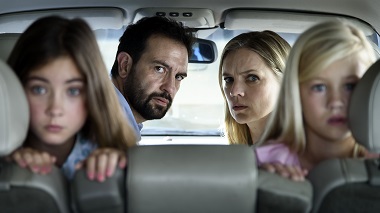 It is all filmed in bright sunshine with plenty of potential witnesses, making what is going on all the more frightening and being filmed mostly from inside a car lends a claustrophobic atmosphere and heightens the sense of being trapped.

This is certainly a cautionary tale about the perils of allowing yourself to succumb to road rage, you never know who is in the other vehicle and you will never look at a white van the same way again.

A really good film and well worth a watch.

“The time for apologies is behind us.”

Tailgate is available to stream now on Digital HD and Prime Video.