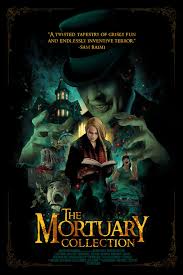 “The world is not made of atoms. It is made of stories.”

The town of Raven’s End and a young boy (Tristan Byon – A Million Little Things) is bicycling around doing his paper round. In the woods, he comes across a creepy old building with uncollected newspapers outside. He investigates, only to be caught out by a scary old man and run away in fear. 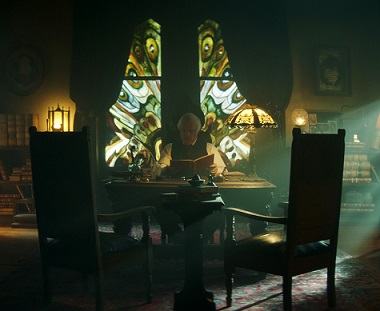 The creepy house is in fact the town mortuary and the old man is the mortician, Montgomery Dark (Clancy Brown – The Shawshank Redemption, Starship Troopers). He is conducting (slightly overenthusiastically) the funeral of a young local boy Logan (Bradley Bundlie – Loose Ends, The Wrong Child), dead tragically young of unknown causes.

After the funeral a young woman lingers, she has seen a sign outside ‘Help Wanted’. Called Sam (Caitlin Custer – Extraction, Teen Wolf), she doesn’t seem fazed by her surroundings at all and urges the mortician to tell her stories of some of the strange deaths he has seen. He is happy to oblige and thus the anthology begins. 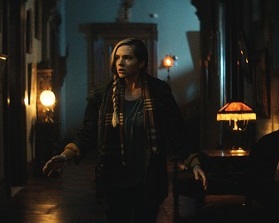 We are treated to a number of stories, including the fate of glamorous pickpocket Emma (Christine Kilmer – My Crazy Ex), a cautionary tale for young men concerning the promiscuous Jake (Jacob Elordi – The Kissing Booth) and his latest conquest Sandra (Ema Horvath – The Gallows Act II) and the sad story of Wendell (Barak Hardley – Spell) and his beautiful bride Carol (Sarah Hay – Flesh and Bone).

The Mortuary Collection is a very enjoyable watch with plenty of humour and lots and lots of gleeful gore. There are a few ‘turn away from the screen’ moments and the effects are very good. It features excellent acting performances from all concerned and is expertly directed with a very shocking twist at the end. It also benefits from an excellent soundtrack courtesy of the Mondo Boys.

Very well written, and definitely worth a watch. Grab the popcorn and head on over to Shudder.

“That’s not bad. I was expecting something a bit more substantial, , maybe an ironic comeuppance or big twist, but it was fun.”

The Mortuary Collection will be available to stream on Shudder from 15th October 2020.