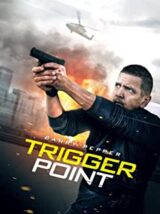 The Search for Q.

Serial TV director Brad Turner (Airwolf (TV Series), The Outer Limits (TV Series)) returns to the big screen with Trigger Point. In this U.S. Agent using his Sherlockian skills, his magic phone and his many bullet holding gun. The spooks come out of the woodwork in this thriller. Trigger Point comes from the writing talents of Michael Vickerman (The Deadly Pledge, Star Spangled Banners).

Somewhere in America, spooks are being snuffed out. Nobody knows how these men and women were identified. Someone must have leaked the information on the top secret agency that Nicolas Shaw (True Grit, Saving Private Ryan, The Green Mile) works in.

But he goes missing for a year, and this is the start for Trigger Point. We find Nicolas at his rural barn fortress, which has many modern secret gadgets which keep his home looking like an old barn in the middle of nowhere. Nearby is the small town of Bayfield that has all the amenities he may need and a small bookshop, run by Irene (Jayne Eastwood, My Big Fat Greek

Wedding), to satisfy his hunger for the books he orders. The only other place, Lewis (Michael Vickerman) frequents regularly is the Café run by Janice (Nazneen Contractor, Star Trek into Darkness, Parts Per Billion) where he always sits in the same seat where he can observe the main street of the town.

That is where he spots a man looking suspicious, Nicolas steps into his agent mode and ends up in the back of the mystery man’s car, where awaits his quarry. It turns out to be agent Dwight Logan (Carlo Rota, A Perfect Plan, The Diggers) sent to find Nicolas. But it is Nicolas that does the finding, and needless to say Dwight is shocked when he gets in his car. Nicolas tells him to drive, he is taken to Dwight’s commander Elias

Kane (Colm Feore, The Chronicles of Riddick, Thor) who is out to find out who blabbed the names of the other agents that were killed, and who is this Quentin Lane (No mention, spoiler alert) who runs all the dark operations and not so legal deals? Also, is it Quentin who has the operative and Elias’s daughter Monica Kane (Eve Harlow, Juno, The Tall Man)?

Nicolas/Lewis has to use his special set of skills to get to the bottom of this mystery. A man with pinpoint accuracy.

Trigger Point is available on Streaming sites and Amazon Prime