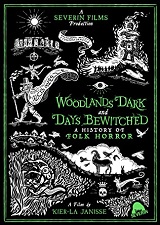 Woodlands Dark and Days Bewitched: A History of Folk Horror is a feature length documentary, written, directed and co-produced by Kier-La Janisse (founder of The Miskatonic Institute of Horror Studies).

This Shudder exclusive is available to stream now.

“Ancient wisdoms, if you like, that have been long repressed and forgotten rise up again, very often to the consternation of complacent, modern man.”

This documentary is split into six different sections, the first one being “The Unholy Trinity – Superstition and folk horror” which examines the three films which arguably kick started the genre in the late sixties/early seventies. These were Michael Reeves – Witchfinder General, Piers Haggard – The Blood on Satan’s Claw and Robin Hardy – The Wicker Man. 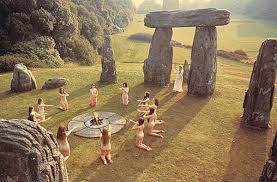 Part two is perhaps the most comprehensive portion of this documentary, “Who is this, who is coming? – Signposts of British Folk Horror” which examines some of the greats such as Ghost stories for Christmas by Lawrence Gordon Clark. It also looks at the unique relationship that the UK has to the land and the many region specific superstitions and beliefs which are prevalent.

Section three “We don’t go back – Paganism and Witchcraft” looks into the growing interest in the occult which informed the folk horror films of the seventies, as well as the influence that horror films can have on the folklore which created them. 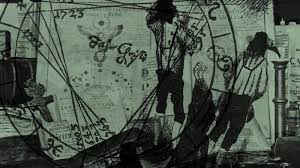 Part four “Call me from the Valley – American Folk Horror” discusses the belief systems and anxieties of the American people and the influences which led to a very different brand of folk horror, with their wide open spaces and disenfranchised indigenous population. It also deals with the cultural significance of the Salem Witch Trials and the fear of isolated and unmonitored communities, following events such as Jonestown. 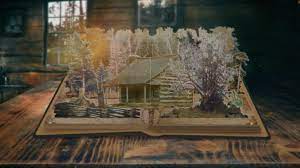 The fifth part “All the Haunts be Ours – Folk Horror Around the World” is a fascinating look at the cultural differences and yet strange similarities in the folklore and folk horror films from countries around the world, looking in particular at Brazil, Australia and Japan, as well as Scandinavian and European countries.

Last and by no means least is “Folk Horror Revival” which looks at the recent resurgence of the genre and speculates as to the reason behind this need to re-examine the folk tales of the past given the current situation in which we find ourselves.

Woodlands Dark and Days Bewitched: A History of Folk Horror is an epic study of this very interesting and wide ranging genre and at 3 hours and 15 minutes long, it certainly covers most of the bases. 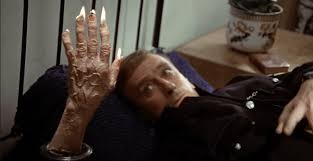 It’s well presented and put together, and maintains a good sense of brooding and atmosphere throughout, enhancing the experience with acapella performances and ominous poetry readings. Featuring interviews from many authors, directors and scholars, with excerpts from over 200 films, this comprehensive guide will have you rummaging through your collection, dusting off old favourites and perhaps even watching them with fresh eyes.

A brilliant watch which will thoroughly satisfy even the geekiest of horror buffs.

“We don’t go back, because if we go back we enter a realm of superstition, a madness.”

Woodlands Dark and Days Bewitched: A History of Folk Horror is available to stream now on Shudder.