You’ve Loved the Rest, Now for the Best.

The box-office blockbuster anime comes to the small screen in this Manga release. Directed by Tatsuya Nagamine (One Piece Film Z), this is his first venture into directing this iconic anime title and he has the raised the bar for what is to come. Those familiar with this franchise will not be disappointed with this collectors edition Blu-ray and those new to it are in for a treat when they see the the back catalogue of Dragon Ball.

Set 41 years ago on the planet Vegeta where the Saiyans live under the rule of the ruthless King Cold. The Saiyans are lapdogs for King Cold, they

conquer planets for the King and then these planets are sold off to the highest bidders. King Cold arrives on planet Vegeta and declares that with immediate effect he is stepping down and handing the reins of control to his young son Frieza. Frieza is fixated about the legend of the Super Saiyan and doesn’t trust any of the Saiyans.

Vegeta has a son in a birthing pod and he is very displeased when he finds another infant in an adjacent pod, a lowly warrior class as well. The scientist says the infant has a great potential, event to outclass Vegeta’s son. Vegeta will have

nothing to do with this Broly and he has it banished to a backwater planet and left to its fate. His father Paragus finds out about this and gives chase to the pod. He crash lands on the planet where his newly hatched son has survived the harsh conditions of this hostile planet Vampa.

Frieza recalls all Saiyans back to their home world while his fleet hovers in space observing all the ships headed home. One of these warriors is Bardock who suspects something is about to happen, something

disastrous. He tells his wife Gine that they should steal a pod and send their son Kakarot to an insignificant  planet called Earth. Bardock was right in his suspicions about Frieza, as he takes it upon himself to destroy the planet of Vegeta and all the Saiyans. The Saiyan race is eradicated, except for Broly and Paragus, Goku and his brother Raditz, Vegeta and his comrade Nappa and Vegeta’s brother Tarble.

Present day Earth and Goku and Vegeta spend all their time sparring at their purpose built island,  with Bulma, Bulla, Beerus and Whis. Bulma is contacted by Trunks, who informs her that six of the Dragon Balls have been stolen by Frieza’s soldiers. They stole the Dragon Ball locator as well, but Bulma isn’t worried, she located it before and as it is the Arctic region and she wasn’t in any rush to freeze. But they head to the Arctic to get it before Frieza can get his hands on them all. 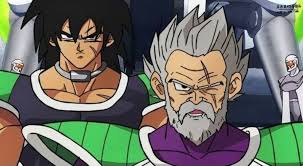 Meanwhile on planet Vampa, Broly and Pargus have survived and his father has trained him to ruthlessly obtain his full potential. He is a danger to himself and those around him to the point that his father cut off his tail and put a controlling collar around his neck, just in case. Out in space Cheelai and Lemo, two low-class soldiers in Frieza’s 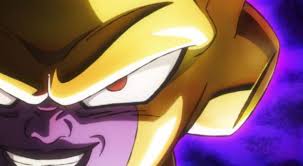 army are searching for recruits and when they pick up Pargus and Brolys power signals they have to find them and recruit them for Frieza’s army.

Frieza is well impressed with their find and pays them handsomely and recruits them to destroy his hated enemies Goku and Vegeta.

Dragon Ball Super: Broly is a must for any DB fan, especially on this Blu-ray collectors package. 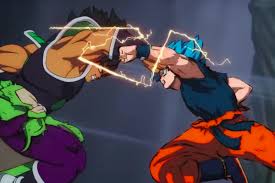 Dragon Ball Super: Broly is available on DVD and Blu-ray