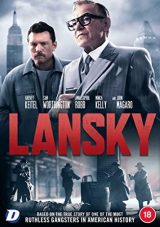 It’s all in the Numbers.

Writer/director Eytan Rockaway (The Confined (film)) brings us the biography of the most notorious gangster in US history, Meyer Lansky (Harvey Keitel, and John Magaro). From the early 1900s, New York through World Wars to Vegas and on to old age and ill health. He wants to get things off his chest, and he chooses a down on his luck writer.

After a long career as a man known to the FBI, but never indited, he is the focus of many an interview about the amount of influence he has in casino’s and if he has hundreds of millions of dollars squirrelled away.

“I have no knowledge of that.”

The man is Meyer Lansky (Harvey Keitel, Reservoir Dogs, Pulp Fiction, From Dusk Till Dawn), and his career as a top mob boss is over. He is lucky, he is alive, and now he wants to tell his story so that every one can hear his tale. And for people to hear this, he must tell it to someone who can put it into typeface.

That person is down on his luck author David Stone (Sam Worthington, Terminator Salvation, Avatar, Wrath of the Titans). He has had a taste of success, but now he is looking for the next big thing, all this has had a toll on his personal life as he is now divorced, but still very much in touch with his ex and his offspring.

It is 1981, and we are in a diner in Miami, Meyer Lansky sits in his regular booth as Sam walks in with his bag full of note pads, and a tape recorder.

Lansky orders his usual breakfast from waitress Dafne (Jackie Cruz, Orange Is the New Black (TV Series), Panama), as Sam puts down his tape recorder and turns it on.

I’d prefer if you didn’t use that.

With the ground rules set down, Lansky tells Sam his own life history, thus proving that Lansky has an eye for detail in everything he does.

Why do you want this job?…. The money.

Now that the pair of them know where they are coming from, the life of Meyer Lansky (John Magaro, The Umbrella Academy (TV Series), War Machine) begins, from his Russian roots to when he is ten years old in New York City in 1912, where his family have settled, they are poor and Meyer is watching a dice game in the street. He wagers the money for the families bread, only to lose it. This annoys the young mathematics addict. He watches the games and works out the odds, and when to play, but even that is wrong, until he notices the guy on the side controlling the game, it’s fixed. That is when he sees his opportunity and wins.

With his natural ability with numbers and with Ben ‘Bugsy’ Siegel’s (David Cade, Into the Ashes, Bigger Than the Beatles) ability to persuade people to pay up, they start to take control of the racketeering in the local area. But they have bigger plans. That would involve getting in with Charlie ‘Lucky’ Luciano (Shane McRae, Sneaky Pete (TV Series), Still Alice). This is how Meyer Lansky rose to the top of America’s crime syndicate.

Watch as two lives are laid bare, one has a broken home, the other ruled the underworld. Both under the watchful eye of the FBI.

Lansky is available on DVD