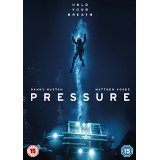 4 Star Edge of the Seat Thriller

Relative newcomer director Ron Scalpello (Offender) brings the tense story from newcomer Louis Baxter about what it is like to think it is all over, while there are those who will go all out to survive.

The oil industry has thousands of miles of pipeline, a lot are above ground in inhospitable landscapes of barren countryside. But there are mile after mile within the depths of the world’s oceans and seas, in the dark cold depths hidden from the sunlight that gives us life.

It is a rare breed of people who look after them, making sure the lifeblood of their country keeps flowing through its arteries.

Aboard a support ship Karsen (Ian Pirie, The Wee Man), the man in charge of looking after the pipeline, has got a leak 600ft down and as they know there is a major storm heading their way, this means that all the best deep sea welders

With Jones being the youngest and only having been down 30ft and Hurst a washed up veteran diver, this isn’t the best choice Karsen could make. But a leak is an expensive and potential disaster, the job has to be done. So the pressure builds as they climb inside their pressurised vessel and head for the deep dark sea bed.

Once touchdown is achieved they suit up and head out to find the marker to locate the problem and sort it out, good job, so they head back and look forward to getting back on board the ship. However, as they head upward things start to jump about as the storm hits topside. With communications breaking up, they start to panic and when they suddenly start rapidly descending and hit the bottom again it looks bad for our pressurised four.

With Engel doing safety checks outside, Jones tries to regain communications and Mitchell barks orders and protocol. With oxygen in short supply things have to be done and there are supplies at the way stations along the pipeline, but on the way a terrible discovery is made that will change the suspense of this feature.

This is an edge of the seat film and it will make you see how long you can hold your breath while the action unfolds on the screen. Who will survive, who will make critical decisions and who will crack under the Pressure?