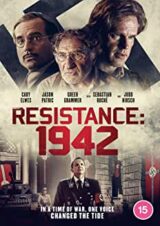 A War of Words.

Writers/directors Matthew Hill, Landon Johnson (Hello, My Name Is Charlie) bring us their second feature, and what a way to showcase their talent with this powerful, moving, inspiring wartime drama. It is about a collection of people in Nazi controlled France, and any voice that is not sanctioned by the Gestapo must be most vigorously rubbed out.

Our film starts with a brief history of the 1940s, as the British leave France in 1940, and that food and provisions were scarce in 1941. By 1942 the Vichy and the Gestapo are working together, and radio speeches fuel both the Nazi regime and those fighting against them. By late 1942 the Vichy and the Gestapo actively hunt down broadcasters. One voice in the dark rings out.

We shall never surrender.

The Gestapo are after ‘the voice’ a person who has been transmitting for the last three years, keeping the hopes up of all French people may they be resistance fighters or just fighting to stay alive. His short broadcasts keep annoying the Vichy and the Gestapo, who cannot work out where he is transmitting from. But as the Gestapo capture the voice’s listeners, they soon obtain the name of Jacques.

In an abandoned apartment building in the war torn Lyon, a small group of people hide in the attic, well away from the Jew hunting eyes of the Nazis. Bertrand (Judd Hirsch, Taxi (TV Series), Independence Day, A Beautiful Mind) and his ailing wife Agnes (Mira Furlan, Babylon 5 (TV Series), Babylon 5: In the Beginning (TV

They are inflamed by his words, history has been changed more than once, by the wrong sentence at the right time.

They are all trying to scrape enough money together to buy forged travel papers, but the task seems impossible with just Juliet going out to work, even if she manages to find a German coin in the basement at work. In that basement, they hide the spare parts for Jacques transmitter, Juliet has to go and get a valve so that her father can transmit later that night. But when she gets to work, there is 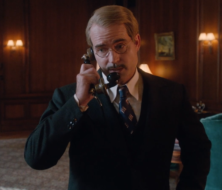 a young German officer greeting each of the girls as they enter the building, Juliet is a bit standoffish, which is why he follows her into the basement and tries to apprehend her, but she makes a dash for the door. As she is being chased through the streets of Lyon, she dashes into a big building, and into a big private study of Andre (Jason Patric, The Outsider, In the Valley of Elah) a Swiss banker, working for the Germans. But instead of shouting for the guards, he points to a large cupboard, Juliet hides  inside as the officer enters looking for the girl. Andre denies seeing any girl. Their lives are now tied together. 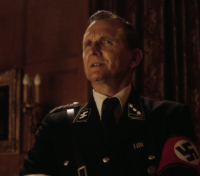 The Gestapo officer tasked with eradicating the voice is Klaus Jager (Sebastian Roché, The Man in the High Castle (TV Series), A Walk Among the Tombstones) and his French subordinate Inspector Rousseau (Gilles Marini, Switched at Birth (TV Series), Days of Our Lives (TV Series)). Jager will do anything to silence the voice, and he can do it any way he sees fit.

Resistance 1942 is a cracking drama about the suffering and the struggle to stay alive in Nazi occupied France. It pulls no punches as the Nazis talk at dinner about their anti-Semitic views about the new order of thing to come when they win the war. Cracking performances from great actors, and. It seems a great tribute to the late Mira Furlan (her last performance). 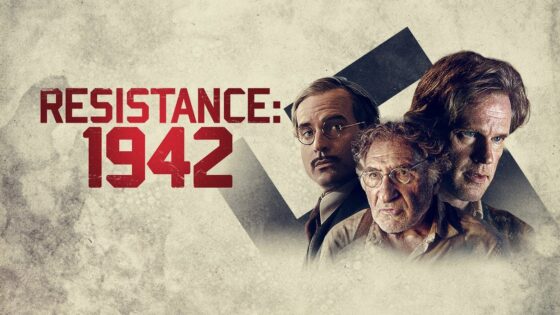 Resistance 1942 is available on DVD